The Putin-Macron Handshake The World Was Waiting For 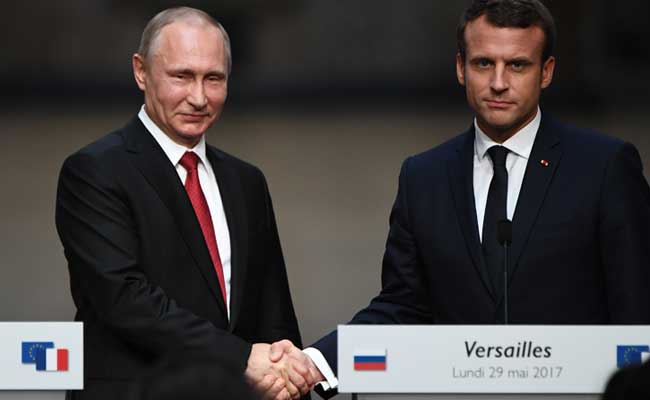 As Russian President Vladimir Putin arrived at the Versailles Palace on Monday to meet Emmanuel Macron, the recently elected leader of France, all eyes were on the handshake.

Macron had surprised the world last week with his white-knuckle grasp of President Donald Trump's hand when the pair met for the first time. Trump had already gained notoriety for his handshake, a vigorous tug that has caught some world leaders off guard.

The French president, however, came prepared.

Though Trump leaned in first, he tried to release his hand from the lengthy shake, twice, while Macron kept squeezing. Speaking to Le Journal du Dimanche this weekend, Macron explained that "my handshake with him, it wasn't innocent," later adding: "One must show that you won't make small concessions, even symbolic ones, but also not over-publicize things, either."

Outside the Versailles Palace, reporters waited eagerly for a potentially tense Franco-Russian handshake. As Putin stepped out of his car, many people pulled out their cameras to capture the greeting between the two leaders. But anyone expecting fireworks would probably have been disappointed: Macron and Putin shook hands amiably for seven seconds before heading inside.

Other videos show that inside the palace, the pair shook hands again - for about six seconds.

Macron's relatively simple greeting of Putin belies a complicated relationship between the two leaders. Under Putin, a former KGB officer with a strongman image, Russia had supported far-right leader Marine Le Pen in France's presidential election this year. In the final days before the vote, Macron aides had claimed that Russian groups had hacked his campaign and released internal information in a bid to discredit it. Moscow denies such allegations.

Macron had name-checked Putin in an interview this weekend, suggesting that he knew how to deal with such leaders. "Donald Trump, the Turkish president or the Russian president are in a balance-of-power logic, which doesn't bother me," Macron said. "I don't believe in the diplomacy of public invective, but in my bilateral conversations, I will let nothing pass. That's how you make yourself respected."

Monday's meeting - during which Macron and Putin will tour an exhibition marking the 300th anniversary of Russian Czar Peter the Great's trip to Paris - was scheduled to discuss weighty topics, including the crises in Syria and Ukraine.

(This story has not been edited by NDTV staff and is auto-generated from a syndicated feed.)
Comments
Vladimir PutinEmmanuel MacronHandshake