The Other Kim Summit: Donald Trump Meets Kim Kardashian At The White House 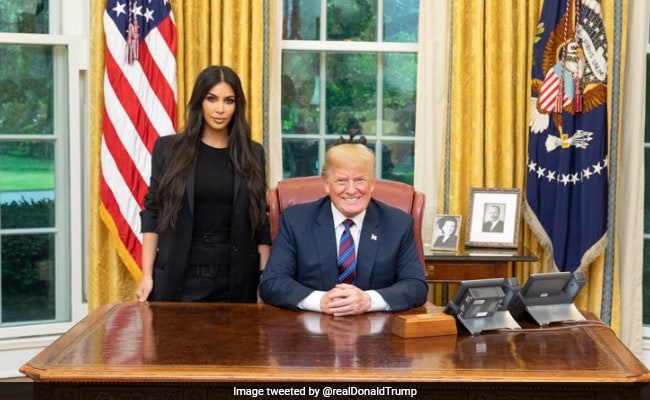 Donald Trump has so far taken a more hardline approach to criminal justice.

In the end, she met with fellow TV personality, President Donald Trump -- formerly of "The Apprentice" and New York tabloid fame.

"Great meeting with @KimKardashian today, talked about prison reform and sentencing," the president said in a tweet, accompanied by a photograph of the pair in the Oval Office, with Trump flashing a broad grin.

Kardashian, 37, is known for her socialite TV persona, but has also called for the release of Alice Marie Johnson, a 62-year-old who has been in prison for more than two decades for a nonviolent drug offense.

Fixing tough sentencing laws had been a priority of president Barack Obama's administration, but he failed to win Congressional support, prompting a stream of presidential pardons and clemency actions.

Trump has so far taken a more hardline approach, advocating a "lock-em-up-and-throw-away-the-key" approach to criminal justice.

During his first year and half in office he has pardoned disgraced Arizona sheriff Joe Arpaio, a Trump supporter who was convicted of violating a court order to halt traffic patrols targeting immigrants.

Promoted
Listen to the latest songs, only on JioSaavn.com
Last month, Kim's rapper husband Kanye West raised eyebrows after tweeting about his "love" for Trump and describing him as a "brother" with whom he shared "dragon energy."
© Thomson Reuters 2018