The Oldest Known Relative Of Dinosaurs Was A Total Freak, Experts Say 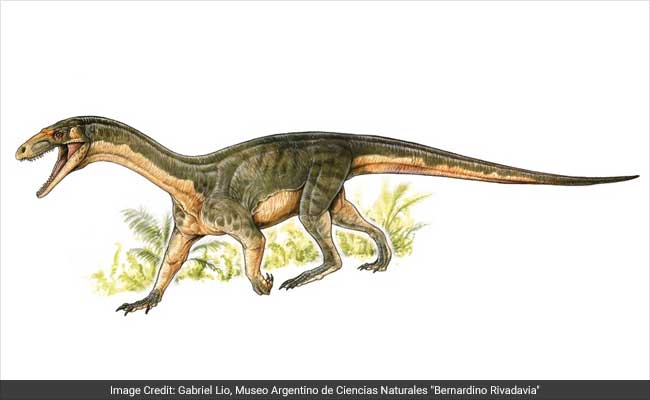 An artist's reconstruction of the new species Teleocrater rhadinus, an early relative of dinosaurs.

The 245-million-year-old fossils were some of the strangest ones Sterling Nesbitt had ever seen. Their bodies looked like crocodiles - stout and muscular, with four sturdy legs. But their necks and tails were unusually long, and the bones bore certain markings only found in dinosaurs.

The fossils definitely didn't belong to any creature known to science. But Nesbitt knew of an oddball animal that would fit these fossils perfectly: Teleocrater rhadinos, an ancient reptile discovered in Tanzania in the 1930s but never formally classified. Nesbitt had seen teleocrater's skeleton displayed in the London Natural History Museum years ago.

Now, standing amid swaying grasses and piles of upturned soil at a fossil site not far from where the original bones were discovered, gazing at the remains of three new specimens, Nesbitt knew he was looking at the same creature.

This time, he and his colleagues had enough material to figure out how teleocrater fits into the evolutionary family tree. It is the oldest known branch on the lineage that would eventually lead to dinosaurs, they report Wednesday in the journal Nature.

To the untrained eye, teleocrater looks no stranger than any other dinosaur, but experts say its body plan is extremely unusual for an ancient reptile. The freaky newfound species is forcing paleontologists to rethink how dinosaurs evolved.

Nesbitt, a vertebrate paleobiologist at Virginia Tech, is an expert on the rise of a group of animals called archosaurs. Around 250 million years ago, that group diversified into two lineages - one led to today's crocodiles, the other led to the "avemetatarsalins," which included dinosaurs and eventually birds.

Phylogenetic analysis, which compares traits of various species to figure out how they relate to one another, suggests that teleocrater is a very early branch on the avemetatarsalin lineage. It's not a direct ancestor of dinosaurs (teleocrater's lineage eventually went extinct). Instead, it's more like an older cousin - one with a deep knowledge of family history and a proclivity for gossip. It can tell scientists quite a lot about dinosaurs' murky past.

"Given their position on the family tree, they give us a good idea of what the common ancestor of all bird line archosaurs was like," said Ken Angielczyk, a paleontologist at the Field Museum in Chicago and a co-author on the study. "If we want to understand how the very distinctive dinosaur and bird body plan evolved into something that's very successful . . . teleocrater provides insight into the first step in that process."

The story that teleocrater tells is quite complex, the scientists say. The new species shows that some features thought to characterize dinosaurs actually evolved much earlier, soon after the split from crocodiles. Teleocrater bears a depression in its skull usually found only in dinosaurs, its hip muscles attached to its thigh bones in the same manner as those of birds, and its vertebrae are similar to those of other avemetatarsalins. But teleocrater lacks the distinctive ankle bone that would come to characterize dinosaurs and birds, and it walked on four legs, not two, as scientists believe the earliest dinosaurs did. This suggests that the ancient giants' distinctive body plan evolved gradually, and possibly multiple times.

This matters, because dinosaurs are some of the most successful creatures in Earth's history, and scientists want to know why. Dinosaurs were the largest animals to walk on land and they dominated the planet for 150 million years (humans, by contrast, have been around for just 200,000 years). Not even a cataclysmic asteroid impact could totally end the party - dinosaurs' descendants, birds, still live among us.

The teleocrater discovery comes in the wake of a recent phylogenetic study that challenged scientists' understanding of the order in which dinosaurs diversified. That research, published in Nature last month, suggested that dinosaur family groupings needed to be reorganized and renamed and that dinosaurs arose in a completely different part of the world than originally thought.

"It's almost a one-two punch," Nesbitt said of the two new studies. "It's complicated the once-simple picture of how dinosaurs got their features."

Nesbitt, Angielczyk and their colleagues weren't looking to upend our understanding of dinosaur evolution when they traveled to southern Tanzania in 2015. They were searching the 245-year-old bone beds for clues about the end-Permian mass extinction, which wiped out more species than any other event in Earth's history. The event was so catastrophic that paleontologists refer to it simply as "the Great Dying," and scientists are interested in how life recovered in its wake.

The teleocrater fossils, which date back to about 5 million years after the mass extinction, suggest that the archosaurs evolved to take advantage of the newly vacated ecological niches.

Teleocrater would have fit somewhere in the middle of the early Triassic food chain. It was about 6 to 8 feet long and had the sharp, serrated teeth of a fierce predator. Its legs were shorter than a dinosaur's, but not as sprawling as those of a crocodile. It shared its habitat - a river system lush with ferns - with an array of other reptiles large and small. Large, hippo-sized relatives of mammals called dicynodonts were lumbering around as well.

The first dinosaurs wouldn't appear on the scene until about 15 million years later. But according to Nesbitt, the teleocrater discovery suggests it's worth looking at this period before they evolved.

Promoted
Listen to the latest songs, only on JioSaavn.com
"We should look at their close relatives too," he said "because there's a lot more going on than anyone would have predicted."