The Never Ending Battle Over Net Neutrality Is Far From Over. Here's What's Coming Next

The Republican-led FCC has simply opened a new chapter in a bruising Washington battle that stretches back nearly as far as the dot-com boom itself. 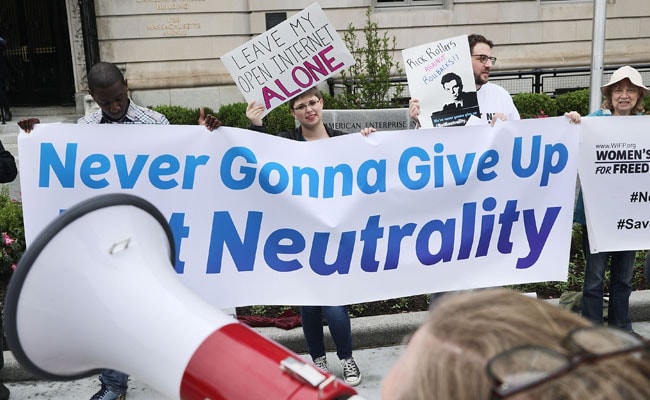 According to analysts, a legal battle over net neutrality could drag on for months if not years. (File)

Washington: The Federal Communications Commission's vote on Thursday to repeal its net neutrality rules marked the end of a brief experiment by the network regulator to rein in the tremendous power of Internet providers by treating them like the highly-regulated telecoms. Now, providers will be allowed to speed up some websites - and block or slow down others - so long as they disclose it to the public, and violations will largely be handled after the fact by the Federal Trade Commission, not the FCC.

But far from settling the matter, the Republican-led FCC has simply opened a new chapter in a bruising Washington battle that stretches back nearly as far as the dot-com boom itself. Those on both sides who've watched the policy seesaw wildly back and forth have but one emotion to report: Exhaustion.

"For the last decade, we've been on a regulatory roller coaster," said Jack Nadler, a partner at the law firm Squire Patton Boggs, who blames a chronic case of net neutrality whiplash on Washington's "recurring bureaucratic convulsions."

That dynamic threatened to play out once more this week as the FCC voted to dismantle the Obama-era network rules put into place just two years ago. Even before the agency's meeting had concluded, supporters of the regulations quickly vowed to sue the FCC in an effort to stop it.

"We will fight the FCC's decisions in the courts, and we will fight it in the halls of Congress," said Sen. Ed Markey, D-Mass., who promised Thursday to introduce legislation along with more than a dozen other lawmakers to overturn the FCC vote.

New York's attorney general, Eric Schneiderman, announced Thursday that he intends to file a multi-state lawsuit against the FCC.

Meanwhile, state lawmakers in California and Washington have said they will try to write their own legislation to replace the federal rules - though that effort could be swiftly quashed. The FCC's decision on Thursday explicitly sought to preempt states from going around the federal rules, and agency officials made clear that they would act against such attempts.

Any new litigation could lead to the second time the FCC has gone to court over net neutrality in as many years.

"I'm shocked - shocked! - that people are going to challenge this decision in court," FCC Chairman Ajit Pai said sarcastically to reporters after the vote.

The zig-zag approach to net neutrality is a byproduct of the fact that the FCC is an independent agency; its levers over industry change hands every time a new party takes the White House. In an era of extreme polarization in Washington, that has led to Republicans and Democrats seeking to overturn each other's policies at every opportunity.

"The net neutrality vote has taken on a back-and-forth quality as it has become more partisan," said Randolph May, president of the right-leaning Free State Foundation." This is unfortunate because so much of a proper resolution of the issue, aside from the legal analysis, depends on economic understanding and technological savvy. These are areas in which partisan politics ought to have less sway in determining the right answers."

May said he is confident the seesaw will settle on a policy result that looks much more like what Pai and his allies approved this week than what his predecessor, Chairman Tom Wheeler, put in place.

But other longtime participants in the debate say the fight has only continued this long because Internet providers refuse to concede.

"It has seesawed back and forth because the ISPs won't be satisfied until they've completely neutered the FCC for all time," said Gigi Sohn, a former adviser to Wheeler.

A legal battle could drag on for months if not years, analysts say, adding to a saga that's put powerful Washington lobbyists and sophisticated lawyers at each other's throats over the future of the Web since well before the rise of services like Uber or Netflix streaming.

Under President George W. Bush, the FCC concluded that all consumers deserved to enjoy four fundamental freedoms online: The freedom to access any Web content of their choice, so long as it was legal; the freedom to use any online application; the freedom to use their home broadband connections on any device; and the freedom to get subscription information from their own providers.

First unveiled in a speech in 2004 by Republican FCC Chairman Michael Powell, those principles were formalized as an "Internet policy statement" in 2005. But those provisions were non-binding, and didn't have the force of regulation.

That changed in 2010, when the FCC approved its first-ever net neutrality rules. The new rules were a direct result of the FCC trying - and failing - to use the earlier Internet policy statement to punish Comcast's alleged blocking in 2007 of peer-to-peer filesharing traffic. The new rules banned the blocking of Web content by Internet providers, as well as the slowing down of websites.

But the 2010 regulations were soon challenged by Verizon, which argued that the FCC had overstepped the authority given to it by Congress. After three years of litigation, a federal appeals court finally sided against the FCC in 2014, striking down the most important provisions of the agency's regulation. The court explained that the FCC had tried to regulate Internet providers in the same way that it regulates traditional telecom companies, but without first identifying broadband as a telecommunications service.

The ruling was a major victory for Verizon and its allies at the time, though it soon came to look like a pyrrhic one as the FCC under Wheeler quickly went to work on drafting rules that industry groups feared would be even more strict.

Having been rebuked for essentially failing to show its work, the FCC approved new rules in 2015 that took the extraordinary step of classifying Internet providers as telecom providers, before imposing some of the same bans on blocking and slowing as it had before. Broadband companies vocally opposed the decision, as it opened the door to further regulation in the future, including the possibility of government price controls. But advocates hailed the new rules as a significant consumer protection against the rising power of broadband companies who could determine what sites Americans may effectively access as more of their daily lives moved online.

An industry coalition sued the Democratic-led FCC, leading to yet another court battle. This time, the agency won handily, with a three-judge panel in 2016 upholding the regulations in light of the edits.

But then came President Donald Trump, and along with him, Republican control of the FCC. GOP officials felt that they had been railroaded by Democrats on net neutrality, and Pai - who had been sharply critical of the 2015 rules - vowed to undo his predecessor's legacy.

That effort culminated in Thursday's vote, with broadband companies again emerging on top and tech companies on the defensive.

"The net neutrality debate is about protections for consumers, and has bounced between the FCC and courts for too long," said Noah Theran, a spokesman for the Internet Association, which represents tech firms in Washington. "Consumers deserve robust, legally sustainable net neutrality protections that ban paid prioritization, blocking, and throttling. The internet industry will continue our work to enshrine strong, enforceable protections into law."

(This story has not been edited by NDTV staff and is auto-generated from a syndicated feed.)
Comments
Net NeutalityFederal Communications CommissionNet Neutrality in US