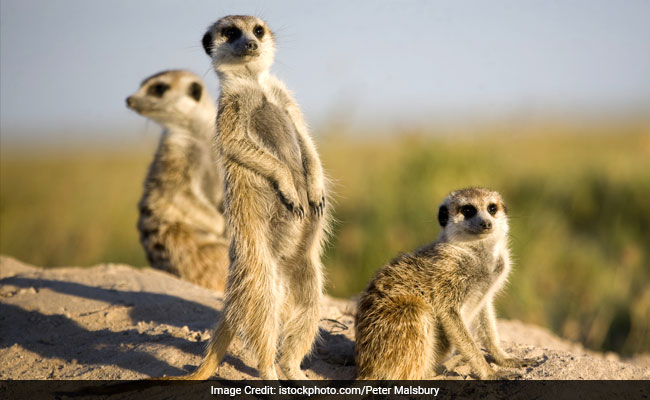 Meerkats, the little African carnivores, stood at the head of the violent class.

Ape shall never kill ape. The primate society in the 1973 film "Battle for the Planet of the Apes," the fifth installment in the Planet of the Apes franchise, was governed by this central rule. It was a pleasant sentiment even when chanted from beneath a rubber mask. But such niceties never seem to last, particularly not in post-apocalyptic fiction.

We hate to rock Dr. Zaius's world, but that rule does not exist in real-life mammal societies, either.

As a new study published in the journal Nature demonstrated, not only does ape kill ape, but the mammalian world is full of murder.

Monkeys kill their own kind, as do lions, a few bat species and long-tailed chinchillas. But the bloodiest, most homicidal of more than 1,000 species surveyed is the meerkat.

The team of Spanish biologists and geneticists behind the study did not set out to point a bloody paw at the meerkat, however. They were more interested in plumbing the evolutionary history of lethal violence, comparing murder rates for 1,024 different types of mammals. The University of Granada researchers combed scientific studies to create a database of lethal aggression, totaling 4 million mammal-on-mammal deaths.

It turned out that, at about 1 in 5 meerkat deaths due to intraspecies slaying, the little African carnivores stood at the head of the violent class. Meerkats off their own young when resources are scarce. Meerkat society is also rigidly hierarchical, and fatally so; as pregnant meerkats will kill a subordinate's offspring to make room in the clan. (If you know a thing or two about the mongoose species, this might not come as a surprise - they are "baby-killing cannibals," per the Telegraph in 2006.)

That 20 percent of deaths are due to such spats is much higher than the typical mammal. The next most murderous are monkey and lemur species, followed by sea lions. Humans are far from cracking the top 30.

The scientists at the University of Granada measured human violence from "600 human populations and societies spanning from the Palaeolithic to the present," as they wrote in the paper. Using this timeline, they calculated a rough baseline murder rate: 1 in 50, or 2 percent of early Homo sapiens were murdered, they concluded.

The history of violence was not constant. After spikes as high as 12 percent in the Middle Ages, a peaceful thing happened on the way to modern society. As University of Reading evolutionary biologist Mark Pagel, who did not conduct the study, wrote in a companion article at Nature, "Rates of homicide in modern societies that have police forces, legal systems, prisons and strong cultural attitudes that reject violence are, at less than 1 in 10,000 deaths," or about 0.01 percent.

"From the empirical figure of 2 percent of deaths by lethal violence in primitive hunter-gatherers, different historical times have had different levels of lethal violence," said lead study author Jose Maria Gomez, of Spain's Experimental Station of Arid Zones, to the Guardian.

Within the context of mammals, humans fall in a curious place. Given a lethal aggression rate of 2 percent, we are far more murderous than the overall average mammal (0.3 percent of deaths) but we are less violent than the primate ancestor we share with other apes (2.3 percent).

What's more, the fact that there is murder in our evolutionary history does not mean we are doomed to oblige. Genetic factors alone might not explain that 2 percent rate, Gomez told the Guardian - "environmental conditions and ecological constraints" matter, too.

Even if murder is in our nature, it is not an impossible influence to stymie. As Pagel noted, the 0.01 percent estimate of murders for modern humans is far less than Gomez's baseline would suggest.