The man who's likely to be China's next president 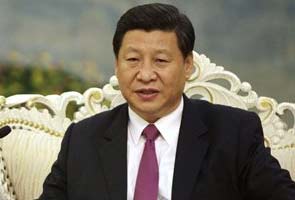 In this File photo, Chinese Vice President Xi Jinping meets with Egypt's President Mohammed Morsi at the Great Hall of the People in Beijing. (Credit:AP)

Beijing: The next leader of a fifth of the world's people is a Communist aristocrat married to a pop star -- but his views are a mystery, hidden behind Party secrecy and an enigmatic demeanour.

Barring an unprecedented upset, Xi Jinping, 59, is to assume China's paramount political post as general secretary of the all-powerful Party at its five-yearly congress beginning this week.

He replaces the outgoing Hu Jintao and the promotion ensures he will take over the national presidency from Hu early next year.

Xi inherits the mantle with his party's key claim to ruling legitimacy -- economic growth -- threatened by a rare slowdown, and its unity shaken by an embarrassing scandal involving one of his former Politburo colleagues.

But owing to the party's intensely secretive nature, observers have found it hard to pin down Xi's beliefs and allegiances -- or how he will address the challenges.

Xi has an impeccable political pedigree as the son of a respected figure in the revolution that brought the Communists to power in 1949, and previously headed some of China's most economically dynamic and reform-minded areas.

Married to a famous Chinese singer, Xi -- a portly figure typically seen on state television with a deadpan expression -- has shown a bit more colour than his predecessor Hu, a Communist bureaucrat with a wooden image.

Xi created a stir during a 2009 speech in Mexico by scoffing at "foreigners with full bellies and nothing to do but criticise our affairs", an apparent reference to the West.

But he has longstanding links with the US, going on an agricultural research trip to the country in 1985 and staying with a family in Muscatine, Iowa, deep in the farming heartland of the Midwest.

Almost three decades later he paid his hosts a return visit while on a much-publicised official trip to the US in February, where he indulged in his purported love of basketball at an NBA game in Washington.

His wife Peng Liyuan is a showbusiness personality who holds the rank of army general and starred for 25 years in a televised Lunar New Year gala watched by hundreds of millions of people.

Xi has tasted both the hard life of the impoverished countryside and the energy of China's economic miracle.

His father Xi Zhongxun fought alongside Mao Zedong and served as vice-premier until he fell in one of Mao's political purges, then was rehabilitated under pragmatic former top leader Deng Xiaoping.

Xi grew up among the privileged elite but, like many young educated Chinese during Mao's 1966-76 "Cultural Revolution", was "sent down" to the countryside to live and work humbly alongside peasants.

While labouring in the poor northern province of Shaanxi, he joined the Communist party and moved to Beijing in 1975 to study at the prestigious Tsinghua University -- also Hu's alma mater.

From there Xi rose up the party ranks mainly on China's fast-growing eastern seaboard, where he earned a reputation as an effective manager and supporter of economic reforms.

He oversaw the key manufacturing provinces of Fujian and Zhejiang before briefly taking the top post in the commercial hub of Shanghai in 2007. Later that year he secured a spot on the party's nine-member Politburo Standing Committee, China's top decision-making body.

When he was named vice-president in 2008 it put him in pole position for the top job.

But there are few clues on what sort of leader he will be in the now-standard 10-year term, and no hint at all that he will be able to impose his will in the consensus-driven upper echelons of the Communist Party even if he wanted to.

The Party tightly restricts any information on top leaders that would reveal them as individuals, a lesson learned from the personality cult developed around Communist founder Mao Zedong -- often to disastrous effect.

There has been speculation that Xi could have a reformist bent, but analysts say he has risen up mainly because his pedigree made him a compromise, status quo choice acceptable to Hu, former president Jiang Zemin and other powerbrokers.

Xi has avoided revealing any leanings that might threaten his status as a consensus candidate, backing non-controversial policies and positions during his rise up the party ranks, said China political analyst Willy Lam.

"He's a team player. He played by the rules of the party. He's not a risk-taker. He doesn't want to take risks that might jeopardise his career," he said.

His extended family have business interests worth hundreds of millions of dollars, according to an investigation by the Bloomberg news agency earlier this year, which said there was no indication of wrongdoing on his or their part.

American diplomatic cables published by WikiLeaks described Xi as pragmatic yet ambitious, willing to tilt with the political winds to advance.

They said he was uncorrupted by money yet with a sense of political entitlement, feeling that fellow "princelings" like him -- the privileged offspring of exalted Communist revolutionaries -- "deserve to rule China".