The Impact Of Imran Khan's Shooting On Pakistan's Army, Economy

Imran Khan, 70, was in stable condition after being shot in the leg while leading a march toward the capital Islamabad to demand an early national election, which isn't due until later next year. 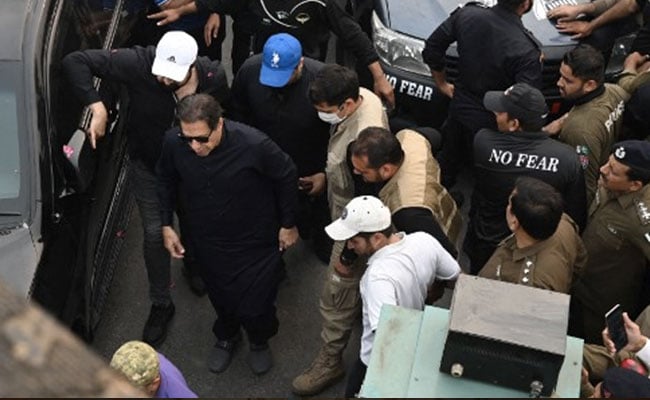 Since his ouster as Prime Minister in April, Imran Khan has embarked on a risky campaign to rally public support against prominent generals who lead Pakistan's most powerful institution. An attempt to kill him on Thursday dramatically raises the stakes for both sides.

Khan, 70, was in stable condition after being shot in the leg while leading a march toward the capital Islamabad to demand an early national election, which isn't due until later next year. His party immediately put the blame on his successor, Prime Minister Shehbaz Sharif, as well as an official in the Inter-Services Intelligence, or ISI, which oversees Pakistan's internal security.

Sharif quickly condemned the shooting, which killed one person and injured seven others, and offered assistance to local authorities leading the investigation. But an outpouring of sympathy for Khan in cities around the country and on social media is only set to put more pressure on the prime minister and the military, which has directly ruled Pakistan for almost half of the period since the country's independence from Britain in 1947.

"It could get quite bloody," said Anit Mukherjee, an associate professor at Singapore's S. Rajaratnam School of International Studies who researches civilian-military relations in South Asia. "There is anger among the supporters of Imran Khan, who would then try to take it out on the establishment."

Khan has shown no sign of backing down as he looks to regain power in the world's fifth-most populous nation, and the shooting is only likely to sharpen his attacks on top generals he blames for orchestrating his ouster. The former cricket star has seen success rallying the masses to his side, winning key by-elections last month despite facing a range of legal cases that could see him disqualified from standing in the next national vote and possibly put behind bars.

Dr @ShireenMazari1 talks to @AlJazeera after the assassination attempt on Imran Khan 1/3 pic.twitter.com/ohMHcRHdLh

Judging by history, Khan faces high odds for returning to power in Pakistan, where no prime minister has served out a full five-year term in office. Many who lasted more than two years were either exiled or killed, including Benazir Bhutto, who was assassinated during a campaign stop in an attack similar to the one against Khan on Thursday.

The shooting also complicates the calculus for the military establishment, which backed Khan's rise to power in 2018 before a falling out last year. Any future attacks on Khan, or attempts to deny his participation in the next election, would put the spotlight on generals who prefer to stay in the background while wielding outsized influence over domestic and foreign policy.

"The Pakistan military won't want a situation where it has to deal with a large number of people with force," said TCA Raghavan, India's former ambassador to Pakistan. "So if the protest swells, the army may tell the government to look for a negotiated settlement with Imran Khan."

The timing of the unrest is sensitive for the military, with current chief General Qamar Javed Bajwa -- widely seen as the most powerful person in Pakistan -- set to retire this month after six years in the job. Khan had previously suggested that the transition shouldn't take place until the next election, so he could have a chance at appointing the next army chief instead of Sharif.

Khan's attempts to control military promotions have been at the root of Pakistan's recent political tensions. Late last year, Khan publicly opposed Bajwa's choice to lead the nation's spy agency, voicing support for one of his own allies to stay in the role. The army chief eventually got his way, but the incident sowed the seeds for Khan's ouster in a parliamentary no-confidence vote roughly six months later.

In speeches afterward, Khan has railed against the military with coded attacks, breaking long-held taboos and raising the ire of generals who are used to commanding respect. At a press briefing last week, military officials blasted Khan for indirectly calling top generals "animals" and "traitors" while secretly seeking Bajwa's help to return as prime minister.

"We told him that the army will not play an unconstitutional role as it has decided to stay apolitical," Lt. General Nadeem Ahmad Anjum, the ISI chief who Khan had opposed last year, said in rare public comments. "We said you make your own political moves if you want to return to power."

When asked to comment on Khan's allegations that an officer was involved in the attack, Pakistan's military referred to an earlier statement that called the shooting "highly condemnable" and expressed hope for the speedy recovery of the former prime minister and others injured in the "unfortunate incident."

The risk of political unrest and more bloodshed threatens to further hurt Pakistan's economy, which is already reeling from the worst floods in its history while seeking more funds from multilateral lenders and donor nations to shore up its ailing finances. Sharif, who met with Chinese President Xi Jinping earlier this week, has sought to bolster ties with all major powers including the US after Khan pushed the nation further toward Beijing and Moscow.

Khan has maintained his support by repeatedly blaming his ouster on interference from the US, an allegation the Biden administration has denied. Pakistan's military and government have dismissed the charge, to little avail.

"His anti-establishment and anti-American narrative is effectively pulling crowds in his favor," said Ejaz Hussain, a Lahore-based political and military analyst. "If elections are held within next couple of months, Khan is likely to win enough seats to form government."

While Khan could seek to appoint a new military chief if he retakes power, such a move is risky. In 1999, incumbent army chief Pervez Musharraf staged a coup against then-leader Nawaz Sharif -- brother of Pakistan's current prime minister -- after being replaced following an election.

"This is easier said than done," Hussain said.

The next few days will be crucial to determining whether Khan and his PTI supporters can rally enough public support to force Sharif and the military to meet his demands. Khan will "certainly get a boost out of this" but it's unclear how sustainable that will be and whether the situation will turn more violent, according to Elizabeth Threlkeld, senior fellow and director of South Asia at the Washington-based Stimson Center.

"Many PTI supporters are describing this as a red line that they see the state of having crossed," she said. "It is hard to see many off ramps."

17 Killed In Suicide Bomb Attack At Pak Mosque, Over 80 Injured