Hope Diamond, Mined In India, Was Born At Hellish Depths Of Earth: Study

Blue diamonds are the rarest diamonds on Earth. A recent survey of 13.8 million diamonds turned up that only 0.02 percent were blue ones. 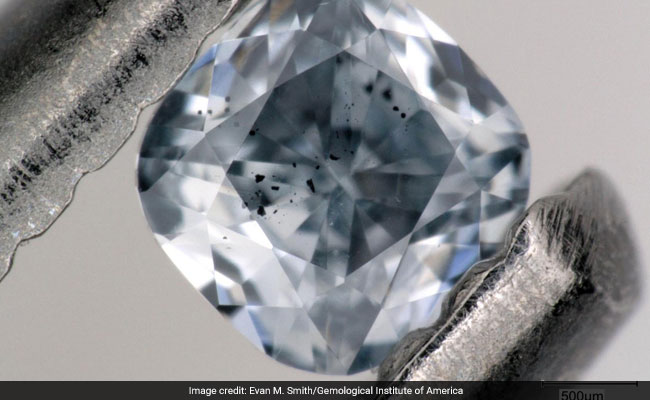 A small blue diamond with inclusions, seen as dark spots.

Before the massive Hope Diamond came to rest in a Smithsonian exhibit, before the gem passed among wealthy owners and thieves and French royals, before it acquired its cursed reputation, before it was mined in India, the diamond was born at hellish depths beneath Earth's crust. Fittingly, the birth of a blue diamond like the Hope requires a complex geologic sequence, a new study published Wednesday in the journal Nature suggests.

Blue diamonds are the rarest diamonds on Earth. A recent survey of 13.8 million diamonds turned up that only 0.02 percent were blue ones. These gemstones form four times deeper in the earth than their colorless cousins, the new report indicates, at depths of at least 400 miles below the surface. That's nearly twice as far underground as the International Space Station is above us.

"We always knew there was something special about these diamonds," said geologist Jeffrey Post, curator of the mineral collection at the Smithsonian's National Museum of Natural History, who was not involved with this report. The study authors make "a very compelling argument" that these diamonds formed at greater than typical depths.

The origin of blue diamonds has long been a puzzle. "We knew essentially absolutely nothing about where they grow," said geologist Evan M. Smith, a lead author of the Nature report and a research scientist at the Gemological Institute of America in New York, a nonprofit that oversees the world's gemstone grading system.

Diamonds, you may recall, are crystals of carbon atoms. Geologists had determined that trace impurities, contamination with the element boron, turn diamonds blue. A boron atom can replace a carbon atom in the crystal structure. It is not a perfect substitute, and a loose electron from boron absorbs red light, giving the diamond a blue hue.

But that discovery only spawned more questions. Boron sticks to the surface of Earth. There should not be any boron to speak of within the interior, where diamonds grow.

To answer the question of where the boron originated, Smith and his colleagues reviewed 46 blue diamonds - including one that fetched $25 million in 2016 - that were submitted to the Gemological Institute of America. (The study authors did not study the Hope Diamond itself, but Post said the gem is representative of natural blue diamonds.) The Gemological Institute of America has access to "more stones than any of us would have access to in our lifetime," Post said. That river of stones passing through graders' hands holds valuable geologic information.

Diamonds grow in rock like plants grow in soil. "When a diamond grows, sometimes it can envelop some of the surrounding material and trap it," Smith said. He offered a cinematic parallel: the amber that trapped a mosquito in "Jurassic Park." The carbon crystals trap other minerals that are known as inclusions.

"I was able to study those inclusions to identify the minerals and start to build up a picture of the birthplace of blue diamonds," Smith said. Those inclusions are a physical fragment of the diamond nursery.

To gem cutters, inclusions are flaws to be carved out. To geologists, though, these are messages from the deep. "If you had to design the perfect capsule to bring something from below, a diamond would be it," Post said.

Within the inclusions, Smith identified the remnants of calcium silicates and other minerals that only form at extreme high pressure. As the diamonds worked their way back toward the surface, the high-pressure minerals within became unstable and shattered. These ruptured minerals left fragments, like shrapnel, stuck in the diamonds. "It kind of looks like the inclusion has exploded, almost," Smith said.

An analysis of these ruptures, plus the list of minerals found in the inclusions, pointed to an unusual birthplace. It required the union of two rocks: oceanic crust from the surface and the underlying ocean mantle. That is a match made in the abyss - where the motion of tectonic plates forces a slab of ocean crust to descend like a conveyor belt for hundreds of miles.

This descent can also explain the wayward boron, Smith said. Boron exists in seawater. He hypothesized that the rocks in descending crust carried the boron below, as if the element were on a gondola ride to the lower mantle. "That is a good circumstantial bit of evidence, at least," Post said.

He said this study cannot prove the origin of the boron but that no better competing theory exists. The most compelling analysis, a direct evaluation of boron in blue diamonds, would be destructive. The Smithsonian has acquired a few blue diamonds, mostly scraps from cut gems, it is willing to sacrifice, Post said. He's just waiting for researchers to propose an experimental design that can justify destroying some of the priciest minerals on Earth.

(Except for the headline, this story has not been edited by NDTV staff and is published from a syndicated feed.)
Comments
Blue DiamondInternational Space Station