The Desperate Attempt To Save Two Climbers On Nanga Parbat

Revol and her partner, Tomasz "Tomek" Mackiewicz, a Polish climber, were more than 24,000 feet up Nanga Parbat, the world's ninth-highest mountain, on Thursday. 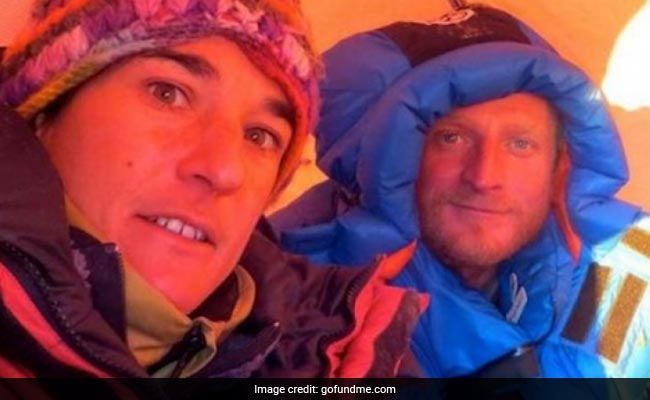 Elisabeth Revol had gone down the mountain to call for help on her satellite phone.

Washington: With her frostbitten and snow-blind climbing partner safe in their only tent, Elisabeth Revol proceeded farther down the mountain to call for help on her satellite phone.

But even if the Frenchwoman could make contact with someone, who would be able to help before the climbers succumbed to the harsh conditions in one of the most inhospitable places on Earth?

Revol and her partner, Tomasz "Tomek" Mackiewicz, a Polish climber, were more than 24,000 feet up Nanga Parbat, the world's ninth-highest mountain, on Thursday.

Mackiewizcz had made the attempt six times in the past six years, falling short every time. Revol joined him starting in 2014.

Nanga Parbat has been killing European climbers since the West discovered it in the late 19th century. The locals in North Pakistan call it diamir, or "huge mountain." But the mountaineering community has another name for it: Killer Mountain.

Six months after two climbers died in an avalanche on Nanga Parbat, Mackiewizcz and Revol were seeking to become just the second team to reach its summit in wintertime. They started in mid-December, according to Mackiewizcz's Facebook page.

By Thursday, they were close.

"Tomek hopes to finally complete his winter ascent of 8,126 m (Nanga Parbat)," organizers said on a crowdfunding campaign in support of the latest expedition. "With each passing year the scale of the project has increased, becoming a major project and healthy obsession, stoked by Tomek's stubbornness."

But his seventh attempt would fail, too. On Thursday, Mackiewicz and his partner realized that he was suffering from frostbite and snow blindness. The ailments, common to mountain climbers, hindered his ability to move and made him more susceptible to potentially fatal altitude sickness.

So Revol secured him and descended alone, trying to reach by phone anyone who could help. With her battery dwindling, she finally made contact.

Shortly afterward, her friend Masha Gordon, a Russian-born British business executive, started a GoFundMe to raise awareness - and money - for a rescue effort:

"A well-known French climber Elisabeth Revol and a Polish climber Tomek Mackiewicz on 25/01/2018 made a daring winter ascent of Nanga Parbat in Pakistan. Unfortunately, on the way Tomek became snow-blind and suffered frostbite. They require a rescue to save Tomek's life who is in a critical condition. The upfront rescue cost is estimated at USD50,000. Please help relatives of the two to raise money required. Every penny and cent helps."

The New York Times reported that the rescue effort was briefly delayed because the Pakistani military refused to scramble a helicopter until the money for its operation was guaranteed, a common practice for such missions in the northern mountains.

As authorities and friends tried to cobble the lifesaving operation together, the GoFundMe page became a news ticker of sorts, updating Revol's efforts.

"Eli managed to bring Tomek down to 7280 m this morning and set him up in a tent to spend the night while the rescue effort gets underway early tomorrow morning," a Friday update read. "Though she has no tent, she is clearly lucid and is making progress on descent to help get rescue effort underway."

A day later, the news was mixed.

Revol was still clearheaded and descending the mountain, "but has frostbites on her toes."

"I am OK," she texted from the satellite phone, according to the GoFundMe page. "Very thirsty and hungry."

Hope came in the form of an "elite climbing team" from Poland. The group of four was attempting to make the first winter ascent of the nearby peak K2, according to the BBC. Authorities contacted them and they agreed to join the rescue effort.

Pakistani military helicopters ferried the four men from one giant mountain to another.

A short time later, about the time rescuers were dropped on the mountain, Revol's satellite phone died.

"She has (no) battery power left," Gordon wrote. "We believe in the strength of her spirit."

Now it was up to the four rescuers to find Revol, whose homing beacon and satellite phone had both died. The rescuers were searching blind.

The helicopter had dropped the four climbers off about half a mile below the last location sent out by Revol's beacon. Two stayed behind to establish a base camp. The other pair - Denis Urubko and Adam Bielecki - set out on a dangerous overnight ascent toward Revol's last recorded location.

Their elation was tempered by the sobering decision that followed. The weather had taken a turn for the worse, with a wind chill 80 degrees below zero and 50 mph winds. It would be impossible to go up for Mackiewicz.

"The rescue for Tomasz is unfortunately not possible - because of the weather and altitude it would put the life of rescuers in extreme danger," the Polish climbing group wrote on its Facebook page. "It's a terrible and painful decision. We are in deep (sadness). All our thoughts go out to Tomek's family and friends. We are crying."

The rescuers descended the mountain with Revol and the group was helicoptered to safety, according to the Associated Press. A physician at Shifa International Hospital in Islamabad said her injuries were not life-threatening and she was in stable condition.

In all, her friends had raised nearly $125,000 for the rescue effort. Organizers said they were trying to make sure as much of that as possible goes to Mackiewicz's wife and three children.