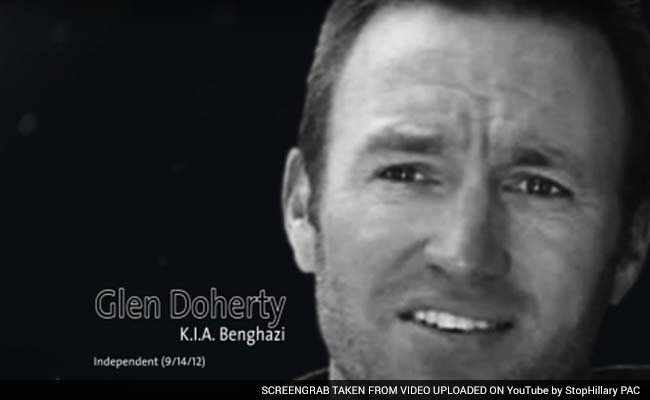 During Tuesday night's Democratic presidential debate on CNN, a provocative anti-Hillary Clinton commercial aired, set to haunting music and featuring the photo of slain CIA contractor, Glen Doherty, who was killed during the 2012 attacks at U.S. facilities in Benghazi, Libya. With the contractor's photo dominating the screen, a narrator begins speaking, as if Doherty himself were talking from the grave.

"Dear Hillary Clinton, I'd like to ask you why you ignored calls for help in Benghazi and then four Americans were murdered," the narrator says, pretending to be Doherty.

The commercial, paid for by the Alexandria, Virginia-based StopHillaryPac, doesn't stop there. The ad goes on to portray the three other Americans killed in the Benghazi attacks, including U.S. Ambassador Christopher Stevens, as if they were all speaking from their graves, denouncing Clinton, whose response to the attacks while she was Secretary of State has come under ceaseless scrutiny from Republicans. The instant reaction to the commercial on Twitter was scathing. For starters, the commercial misspelled Libya.

But people also attacked it for exploiting the images of four people killed in the attack for a very partisan issue on national television. The Post reached out to family members of all four victims profiled in the commercial. None of them had seen the commercial, but once they were given a link to the ad or heard its description, most were angry.

In the commercial, after Doherty condemns Clinton, the ad then shows a picture of Tyrone Woods, another CIA contractor killed during the assault, with a voice pretending to be him.

"I'd like to know why you lied saying the attack was a response to an Internet video," Woods supposedly says from the grave.

"I'd like to hear why you tried to silence the Benghazi whistleblower," says yet another voice, playing Sean Smith, a State Department IT technician, as his smiling face is shown.

And, then for the climax, the image of Ambassador J. Christopher Stevens pops up.

"But Mrs. Clinton, I can't. What difference does it make?" the dead ambassador is supposed to be saying, as the commercial ends with a close-up of his flag-and-flower decorated headstone.

Reached by phone, Mary Commanday, Stevens' mother, was furious. "I think it's a terrible idea and if I could sue him I would," said Commanday, who lives near Oakland, California. She watched the debate but only learned of the commercial after a Post reporter described it to her. "It's an insult to someone who is dead. I think it's a wrong use for the reputation of my son."

Barbara Doherty, 81, was equally irate. "It's horrifying," she said. "I am so upset they'd have my son talking from the grave, saying don't vote for this person. He wasn't political. He would never have done something like this."

Cheryl Croft Bennett, Woods' mother, said she wishes someone from StopHillaryPac would have at least notified her before it ran or at least asked for her blessing. "Why does this kind of advertisement have to be out there? It's hurtful. I don't care what side of the political fence you're on. How would you feel if this was your dead child, and it was done without your permission? How would these people [at StopHillaryPac] feel if their lost child was put in a political advertisement?"

Dan Backer, the counsel and treasurer of StopHillaryPac, said he thought it was important to "remind people what this is about-that these four guys lost their lives." He added: "I certainly don't think it was remotely exploitative. We were trying to convey an idea, emotions. It's powerful and moving. If it was just me sitting in an office, asking those questions, nobody's going to care. I have a face for radio."

Asked if he should have gotten the families' blessings before using their dead relatives' images, Backer said: "I wouldn't have the first clue how to contact them. How do you go about it? Google their names? How do you go about finding people like this?"

One relative, however, was impressed with the ad. Patricia A. Smith, of San Diego, California, who has given multiple interviews with the media railing against Clinton, said she was pleased. "I think it's wonderful," she said.

But would her son approve? She gave conflicting answers.

"My son, he was diplomatic. He would not be for it or against it," Smith said. "He was a Democrat, a flaming liberal as he called it. He would probably send me 28 pages on why it shouldn't be shown."