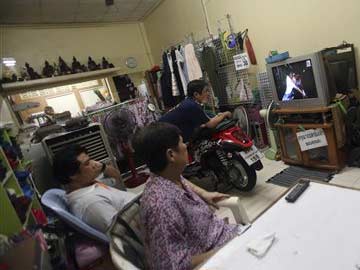 Bangkok: In a famous scene from Thailand's award-winning soap opera "The Power of Shadows," the handsome protagonist gets drunk and rapes the leading lady. He later begs her forgiveness, and they live happily ever after.

Boy Meets Girl, Boy Rapes Girl, Boy Marries Girl. The premise is so common in Thailand's popular primetime melodramas it could be called a national twist on the universal romantic plotline. But calls for change are growing.

The recent real-life rape and murder of a girl on an overnight train in Thailand has focused national outrage on messages in popular culture that trivialise - and some say even encourage - rape. Even the powerful general who took over the country in a coup this year had to apologise after suggesting that women who wear bikinis on the beach are vulnerable to sexual assault.

Many in the soap opera industry continue to defend sexual violence, in part, as a key to high ratings in a fiercely competitive industry that draws more than 18 million viewers a night to network television, nearly a quarter of Thailand's population.

Award-winning director Sitthiwat Tappan even describes some rape scenes as a sort of public service.

"There might be a scene where a woman is dressed sexy, and she walks past a man who has been drinking, and it shows on his face that he's aroused and wants her," Sitthiwat said. "In the end, she succumbs to the physical power of the man."

"Scenes like this try to teach society that women should not travel alone or wear revealing clothes," the director said. "And men shouldn't drink."

But rapists are seldom punished in TV melodramas, and their victims rarely talk about it. That much, at least, is reflected in real life.

Last year, the Public Health Ministry said its hotlines received 31,866 calls from victims of rape or sexual assault. But police that year filed only 3,300 rape cases, and made just 2,245 arrests. Even the hotline number is believed to be far lower than the actual number of assaults in this Southeast Asian country of 67 million.

Public concern about rape in Thai society grew this summer, after a 13-year-old girl was raped on an overnight train, then suffocated and thrown out the window. A 22-year-old train employee has been convicted of the attack and sentenced to death, and the rail authority has introduced a women-and-children-only sleeper carriage with policewomen as guards.

"I'm not saying soap operas are the cause of rape in Thailand. But I believe they are part of the problem," said Nitipan Wiprawit, a 36-year-old architect who launched the petition. "Soap operas send the message that rape is acceptable. This is something that needs to stop."

As a result of Nitipan's petition, the national broadcasting commission has organised roundtables that bring directors and screenwriters together with health and human rights experts to discusss the messages soap operas deliver. The latest one focused on how TV sexual violence influences Thai children, who are often raised on a steady diet of nighttime soaps that parents switch on after dinner.

"Some producers might say that what they're producing doesn't have an impact on people, but I assure you it does," Kemporn Wirunrapan, of Thailand's Child and Youth Media Institute, told the forum. "The more children see repetitive images of violence, the more it will be reinforced in their minds."

In a poll of more than 2,000 youths conducted by Thailand's Assumption University in 2008, more than 20 percent of 13- to-19-year olds said rape scenes were their favorite part of TV shows. The same percentage of teenagers said they found rape to be a normal and acceptable act in society.

Yousinee Nanakorn, producer of one of Thailand's best-known soaps "Prisoner of Love," said rape scenes are sometimes essential to plotlines.

"Soap operas are all about conflict. Without conflict there's no story," she said. "We try to avoid rape scenes, but if it helps drive the story then we keep it."

The idea that some forms of sexual violence are acceptable is reflected even in the Thai language.

The word "blum," which translates roughly as "wrestling," is how Thais describe unconsenting sex that a man initiates to make a woman fall in love with him. It is considered different from "khom-kheun," the criminal act of rape.

"Blum" is what transpires in "The Power of Shadows," says Arunosha Bhanupan, producer of the soap, which aired in 2012 and recorded the highest ratings in the history of its network.

"In theatrical terms, it was an act of love," the producer said, referring to the scene where the lead actor grabs the heroine and rapes her after she slaps him and screams, "Let me go!"

"It wasn't rape. It was more romantic, because they were in love."

That is one type of soap-opera rape scene: the seduction of a "good girl." Thai soaps also have "bad girls," for whom rape is depicted as punishment for behaviour deemed immoral, like dressing provocatively and promiscuity.

Feminist scholar Chalidaporn Songsamphan said rape fantasies in Thai culture stem in part from traditional beliefs that it is improper for women to show sexual desire before marriage.

"When men initiate sex, women have to try to reject it, or say no, to show they are innocent sexually," said Chalidaporn, a women's studies professor at Bangkok's Thammasat University. "Rape scenes on television reflect this kind of thinking."

Prime Minister Prayuth Chan-ocha, the former army chief who took control of the country in May, stumbled into the debate with a comment he made last month, soon after the bodies of two British tourists were found bludgeoned to death on a Thai beach. He said women who wear bikinis in Thailand will be safe "only if they are not beautiful," a remark instantly ridiculed on social media as chauvinistic and insensitive to the female victim, who had been photographed in a bikini prior to her rape and murder. Prayuth apologised for having "spoken too harshly."

Another high-profile slip-up came last month when Durex Thailand released an online advertisement saying: "28 percent of women who resist eventually give in" - an ad viewed as encouraging its male customers to rape. The condom maker quickly pulled the ad from its Thai Facebook page and issued an apology for the "inappropriate" post.

For some actresses, the reality of rape has exposed the flaws in how it is dramatised on television.


Up-and-coming star Pimthong Washirakom played a "bad girl" in the series "The Rising Sun" who is raped by a police detective after he locks her in his office.

As the cameras rolled, the 22-year-old's thoughts drifted to the child whose body was thrown from the train.

"I felt like the girl in the news," she said. "I thought of the 13-year-old girl, and tears started running down my face."

Promoted
Listen to the latest songs, only on JioSaavn.com
Her crying, and violent portions of the rape scene, were edited out of the episode, which ran last month. The cuts drew complaints from some of the cast and crew, but Pimthong supported them.

"Sometimes, viewers don't have the right judgment and might imitate what they see," she said. "Our society is deteriorating every day, so we have to cut certain scenes off. Kids are definitely watching this show. Why would we let them watch a rape scene?"