Test of Gun Finds Only DNA of Deceased Argentine Prosecutor 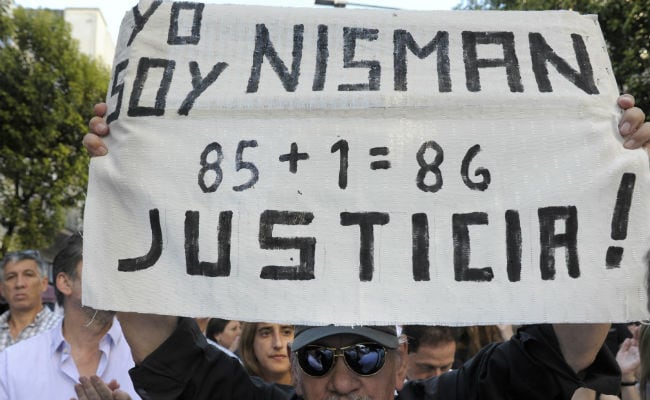 A man holds a placard that reads "I am Nisman, 85+1, Justice" during a rally to protest against the death of Alberto Nisman. (Agence France-Presse)

Buenos Aires:
Testing of the pistol used to kill a prosecutor who had levelled incendiary charges against Argentina's President has found traces of DNA only belonging to him, the lead investigator in the case said on Friday.
Alberto Nisman was found dead in his apartment on January 18, hours before he was to detail allegations that President Christina Fernandez protected former Iranian officials accused of orchestrating the 1994 car-bombing of a Jewish center in Buenos Aires.
Investigator Viviana Fein said on Friday that traces of DNA found on the pistol, its ammunition and other items from the scene "undoubtedly" matched that of Nisman.
She also said a security camera in the service elevator of his apartment building was not working and there were no cameras in its stairwell.
Supporters of Nisman have insisted the prosecutor would not have killed himself and even Fernandez has said that, contrary to initial findings, his death could not have been a suicide.
Nisman had feared for his safety and 10 federal police were assigned to protect him. The officers were suspended as part of the investigation but none have been named as suspects.
Fernandez has denied any connection to the 1994 bombing, which killed 85 people and remains unsolved.
Promoted
Listen to the latest songs, only on JioSaavn.com
Comments
Christina FernandezArgentine ProsecutorArgentina 1994 Bomb AttackAlberto Nisman