The Tesla car appeared to be self-driving, travelling over 140 km/h with both front seats completely reclined and occupants appeared to be asleep, the police said. 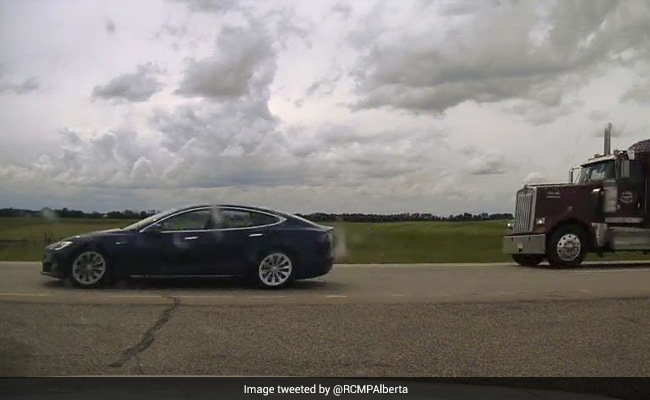 The speed limit on that section of the highway is 110 kilometres per hour.

A driver who allegedly set his car to autopilot and then took a nap as it broke the speed limit on a rural Canadian highway has been charged with dangerous driving, police said.

The incident took place near the town of Ponoka in Alberta province, the local force said in a tweet on Thursday.

"The car appeared to be self-driving, travelling over 140 km/h with both front seats completely reclined & occupants appeared to be asleep," it said.

According to Canadian public broadcaster CBC, the car was an electric Tesla model set to autopilot and the man charged was 20 years old.

The speed limit on that section of the highway is 110 kilometres per hour (68 mph), it added.

Police Sergeant Darrin Turnbull told CBC that he was "speechless" and had not seen such a case in his two-decade career -- "but of course the technology wasn't there".

"Nobody was looking out the windshield to see where the car was going," he said.

Tesla's autopilot mode allows cars to steer, accelerate and brake automatically within a lane, but is not supposed to enable trips without human intervention.

The US company warns on its website that "current autopilot features require active driver supervision and do not make the vehicle autonomous."

But the president of a Canadian Tesla owners' club, who condemned the incident, told CBC that there were videos circulating online with instructions on how to "hack" the cars' safety systems.