Tens Of Thousands Of Greeks Protest Over Macedonia Name Row

Organisers claimed some 1.5 million people from across Greece and the Greek diaspora turned out to express their opposition to attempts by Prime Minister Alexis Tsipras' government to broker a deal. But police put the figure at around 140,000. 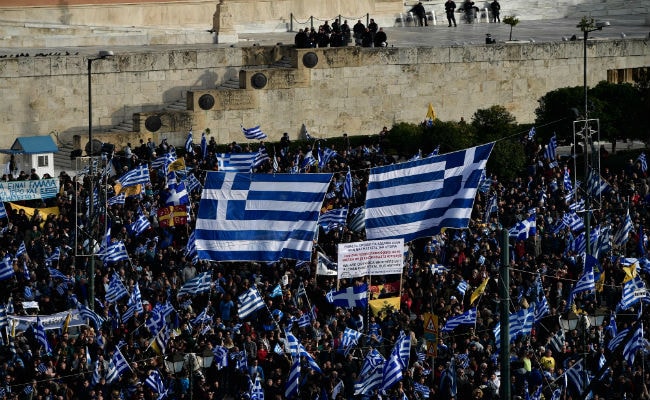 Macedonia: Tens of thousands of Greeks staged a mass rally in Athens on Sunday, urging the government not to compromise in a festering name row with neighbouring Macedonia.

Organisers claimed some 1.5 million people from across Greece and the Greek diaspora turned out to express their opposition to attempts by Prime Minister Alexis Tsipras' government to broker a deal.

"The million protesters that the organisers imagined was wishful thinking," Mr Tsipras said in a statement released by his office.

"The crushing majority of Greek people conclude that foreign policy issues should not be dealt with with fanaticism."

Earlier in the day, a huge Greek flag flew over central Syntagma Square from atop a crane, and Greeks from all over the country and abroad chanted "Hands off Macedonia", "Macedonia is Greek" and "We won't leave until we are vindicated".

Among those in the cross-generation crowd were former PM Antonis Samaras -- who was foreign minister when the name row began in 1991 -- in addition to mayors, senior clerics, army officers and monks.

Keynote speaker Mikis Theodorakis, the renowned Zorba the Greek composer and resistance icon, called on the government to hold a referendum before taking a decision.

"Macedonia was, is and will forever be Greek," 92-year-old Theodorakis told the cheering crowd of protesters.

"If a government considers signing on behalf of our country... there is no doubt it must first ask the Greek people," he said, calling the neighbouring northern state "illegitimate".

Athens objects to Macedonia's name, arguing it suggests that Skopje has claims to the territory and heritage of Greece's historic northern region of the same name.

"Macedonians united Greece against the (Persian Empire)," said Nina Gatzoulis of the US Pan-Macedonian Association, arguing that a Greek climbdown on the name issue would create "permanent instability" in the region.

However, leftist Tsipras has been considering a resolution to the 27-year-old dispute, angering many opposition members and his own nationalist coalition partners.

"Cretan eagles lie in the earth of Macedonia," a Cretan representative told the crowd. "We tell our sister, Macedonia, we will not allow anyone to carve you up."

The protest -- the second on the Macedonia issue in a fortnight -- was organised and funded by Greek diaspora groups, with the support of retired officer associations, cultural unions and church groups.

Anarchists stationed a counter-protest nearby, with riot police deployed to keep the two crowds apart.

Two weeks ago, tens of thousands had protested in Thessaloniki, the capital of Greece's Macedonia region. Police had estimated the turnout at over 90,000, while organisers claimed at least 400,000 attended.

The dispute has remained unresolved since the former Yugoslav republic's independence in 1991.

Greece considers the name "Macedonia" to be part of its own cultural heritage, as the province was the core of Alexander the Great's ancient empire.

Athens seeks guarantees that the use of the name by its neighbour implies no claim to parts of its own territory.

The government has accused far-right hardliners and the neo-Nazi Golden Dawn party of trying to exploit the issue.

Boost Balkan stability
The government insists the rallies will not affect its determination to solve the issue and boost stability in the often tense Balkan region.

Athens says it is ready to accept a composite name that will establish a clear distinction from Greek Macedonia.

"The government is trying to give a patriotic solution to a problem that has troubled the country, its international relations and its diplomacy for over 25 years," government spokesman Dimitris Tzanakopoulos said Sunday.

Because of Greece's objections, Macedonia in 1993 joined the United Nations as the Former Yugoslav Republic of Macedonia (FYROM).

A resolution of the issue is needed before Macedonia can join NATO or the EU.

"They seek to join NATO and the EU with our own vote, so they can threaten us tomorrow from a position of strength," Theodorakis said.

Greece in 2008 threatened to veto Macedonia's NATO entry. Skopje subsequently took the issue to the International Court of Justice, which said Athens had been wrong to block its land-locked neighbour's aspirations.
Comments
Macedonia Name RowProtests in GreekGreece