Teen Pleads Not Guilty to Abuse at Kenya Orphanage 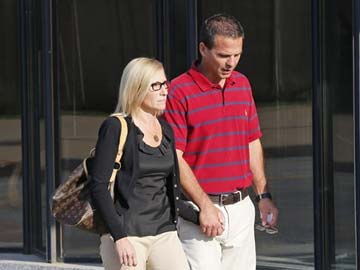 Melissa Durham, left, and Kyle Durham, right, are pictured as they leave the Federal Courthouse in Oklahoma City, Monday, Aug. 4, 2014, following a detention hearing for their son, Matthew Durham.

Oklahoma City: A teen pleaded not guilty on Friday to federal charges that he sexually abused children at an orphanage in Kenya.

Matthew Lane Durham, 19, was indicted on three felony counts by a federal grand jury on Tuesday that accused him of traveling from Oklahoma City to Kenya to sexually abuse children at the Upendo Children's Home. The orphanage outside Nairobi specialises in assisting neglected Kenyan children by providing them with food, housing, clothes and academic and religious instruction.

Durham was also indicted for illicit sexual conduct in foreign places and aggravated sexual abuse. He faces up to life in prison if convicted.

Prosecutors allege that Durham, who has worked as a volunteer at the children's home since June 2012, engaged in sex acts with as many as 10 children ages 4 to 10 between April 30 and June 17.

An affidavit filed in federal court says Durham wrote and signed a statement acknowledging the sexual misconduct, which an Upendo official provided to the US Embassy in Nairobi.

But Jones has challenged the credibility of Durham's statements and claims they were coerced by orphanage officials in Kenya who kept him in isolation and confiscated his passport.

A spokesman for the US Attorney's Office, Bob Troester, said the investigation is ongoing but that Durham is the only person who has been arrested in the case.

Durham spoke softly as he answered questions from US Magistrate Gary Purcell, including whether he understood the nature of the charges. Purcell ordered that Durham remain in custody until his trial, which he set for Sept. 9.

One of his attorneys, Laura Puente, indicated the defense may request a later trial date because of the time required to travel to Africa to conduct interviews. Following the hearing, Durham's lead attorney, Stephen Jones, said he plans to send investigators to Kenya.

Promoted
Listen to the latest songs, only on JioSaavn.com
"We're continuing preparation for the defense," said Jones, who did not attend the arraignment.

Durham's family members, including his parents, left the courtroom without comment.