Following the Taliban's victory in August, the Taliban commander took over as governor of Nangarhar province, home to the ISIS Afghanistan-Pakistan chapter's stronghold. 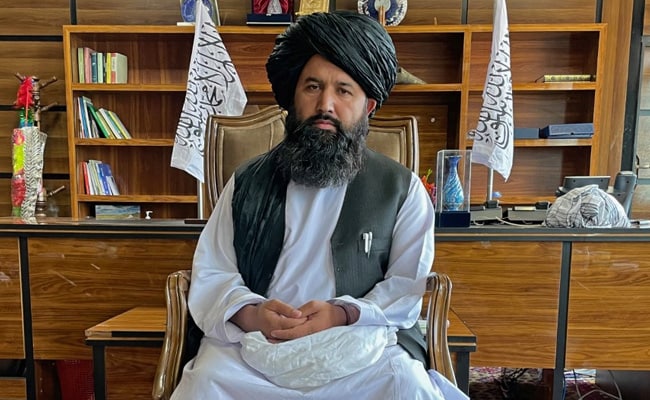 With the Taliban in power, "there will be no reason for (ISIS) to be here", Mullah Neda Mohammad said

As a Taliban commander, he spent years battling the former Afghan government. Now, with his hardline movement back in power, Mullah Neda Mohammad vows to continue fighting against rival jihadists, the ISIS group.

Following the Taliban's victory in August, Mohammad took over as governor of Nangarhar province, home to the ISIS Afghanistan-Pakistan chapter's stronghold.

"We are searching for individuals who are hiding," Mohammad told AFP, claiming his forces have arrested 70 to 80 ISIS members since they took control of Nangarhar's provincial capital Jalalabad, the country's fifth biggest city.

ISIS have been responsible for some of the deadliest attacks in Afghanistan of recent years, massacring civilians at mosques, shrines, public squares and even hospitals.

The group claimed responsibility for a devastating suicide bombing near Kabul airport on August 26 that killed more than 100 Afghans and 13 US soldiers.

It was the deadliest attack against American forces in Afghanistan since 2011.

After the blast, the US military said it had carried out a drone strike against an ISIS "planner" in the Nangarhar province.

Still, Mohammad says he does not believe ISIS poses a great a threat as they did in Iraq and Syria.

"Here they have suffered many casualties in northern and eastern Afghanistan," he told AFP in Jalalabad, at the governor's palace, now decked with Taliban flags.

With the Taliban in power, "there will be no reason for (ISIS) to be here", he said. "We don't consider ISIS as a threat."

Although both ISIS and the Taliban are hardline Sunni Islamist terrorists, they have differed on the minutiae of religion and strategy, while each claiming to be the true flag-bearers of jihad.

That tussle has led to bloody fighting between the two.

One ISIS commentary published after the fall of Kabul accused the Taliban of betraying jihadists with the US withdrawal deal, according to the SITE Intelligence Group, which monitors terrorist communications.

The latest estimates of ISIS's strength vary from 500 active fighters to as high as several thousand, according to a UN report in July.

However, a spree of prison breaks by the Taliban during their summer offensive also led to many ISIS terrorist being released.

The Taliban swept to power with staggering speed, and Mohammad described how he and his fighters were able to march on Jalalabad without firing a shot.

There had been intense fighting against former government forces in nearby Sherzad as they made their advance, but once the Taliban took the village they received word of a surrender.

Jalalabad's former leaders "sent a representative who told us that they did not want to fight any more and wanted to hand over the local government peacefully", Mohammad said.

"We built our organisation here," he said. "We appointed the police chief, intelligence chief and the governor -- which was given to me."

After two decades of fighting an insurgency, the Taliban must rapidly transition into a governing force that can manage a humanitarian crisis and war-wrecked economy.

It has resulted in commanders more at ease with organising ambushes now running cities of hundreds of thousands of people.

Like most in Afghanistan, the people of Nangarhar are scarred by the memories of the Taliban's brutal reign in the 1990s, which was infamous for deaths by stoning, girls being banned from school and women from working in contact with men.

The province's new governor has offered reassuring words, but many people remain sceptical about the Taliban's pledge of a different kind of rule.

"We will protect their rights and we won't allow criminals to harm the people of Afghanistan, particularly the people of Nangarhar," Mohammad said.

Despite the assurances, an aid worker in Jalalabad said on condition of anonymity that "a lot of people in the city are not happy, and they are afraid for freedom of expression".