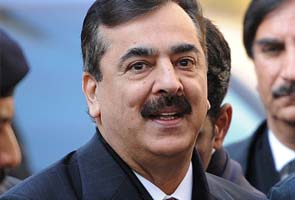 Lahore: The outlawed Tehrik-e-Taliban Pakistan has demanded the release of some of its key leaders for freeing former premier Yousuf Raza Gilani's son, who was abducted five months ago.

Ali Haider Gilani was kidnapped by militants in Multan district on May 9, two days ahead of the general election. His secretary was killed by the kidnappers.

Mr Gilani told reporters in Lahore yesterday that he had received a voice message from his son that outlined the conditions set by the Taliban for his release.

He said Abu Yazid, the spokesman for Al-Mansooreen Brigade, said to be working under the umbrella of the Taliban, had handed over the message to him.

"Abu Yazid presented the demand of the mujahideen to release some high-profile prisoners being held at Adiala Jail in Rawalpindi," Mr Gilani said. He said he had brought the matter to the knowledge of the government.

Mr Gilani has also sought the help of an intelligence agency for the release of his son.

The militant spokesman said mujahideen had abducted Ali Haider to avenge the military operation carried out by Mr Gilani's government against the Taliban in Malakand and Swat in 2009.

"In the message, Haider appealed to the (PML-N) government and security agencies to listen to the demands of his abductors and to do the needful for his release. He said he was not well and that he was not being provided medical treatment," Mr Gilani said.

Sources told PTI that Ali Haider's abductors had also demanded a large amount of money as ransom from the Gilani family.

"Mr Gilani is ready to pay the ransom but he cannot force the PML-N government to release the (Taliban) prisoners," a source said.

Promoted
Listen to the latest songs, only on JioSaavn.com
The sources said the Taliban are holding Ali Haider at Miranshah in the restive tribal belt.