The TransAsia Airways flight was carrying 54 passengers and four crew when it smashed into trees and houses as it attempted to land in a typhoon on Taiwan's scenic Penghu island. 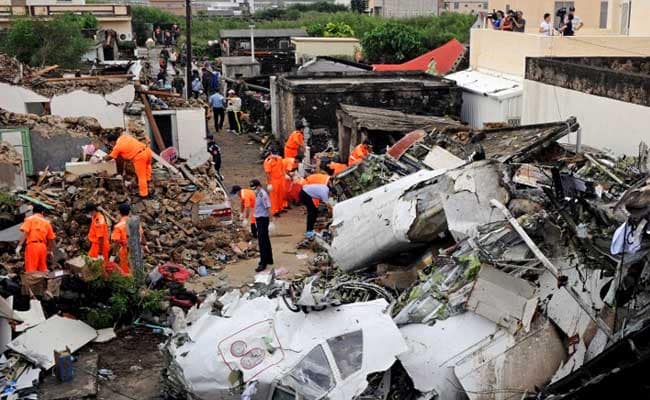 TransAsia Airways flight carrying 54 passengers and 4 crew crashed as it attempted to land.

Taipei, Taiwan: Two air traffic control officers accused of causing a plane crash in Taiwan that killed 49 people in 2014, the island's worst air disaster for a decade, were acquitted Friday.

The TransAsia Airways flight was carrying 54 passengers and four crew when it smashed into trees and houses as it attempted to land in a typhoon on Taiwan's scenic Penghu island.

Lee Chia-feng and Ching Yuan-wu -- who were responsible for runway use and landing approval -- were charged last year with negligence over the incident.

But while acknowledging that the officers made errors, the Penghu district court said the crash was ultimately down to the pilots, who were among those killed.

"The main cause of the accident was because the flight crew did not follow the standard landing procedures," the court said in a statement.

"Operating a flight is highly dependent on the front-line crew acting in accordance with their training and standards. This is even more so during a typhoon, when the climate can change quickly."

The Aviation Safety Council said in its investigation report last year the pilots were flying below the minimum altitude required in poor visibility in a procedural mistake widespread among TransAsia's pilots at the time.

Less than a year after the Penghu accident, another TransAsia flight dramatically crashed into a river shortly after take-off from Taipei, killing 43 people and raising serious concerns about the airline's safety standards.

The dramatic crash of flight GE235 in February 2015 grabbed global headlines as car dashcam footage showed it clipping a road bridge before careering into the water.

An investigation blamed a catalogue of pilot errors, with one found to have mistakenly switched off the only functioning engine after the other had failed.

But the troubled airline was forced to shut down in November last year after the two deadly accidents, while also suffering massive financial losses and an insider trading probe.

(This story has not been edited by NDTV staff and is auto-generated from a syndicated feed.)
Comments
TransAsia AirlinesTransasia plane crashPenghu islandsAir disaster