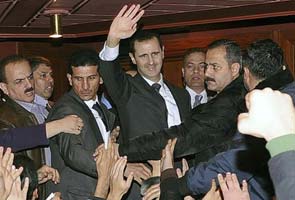 Cairo: The opposition Syrian National Coalition is willing to negotiate a peace deal under U.S and Russian auspices to end the country's civil war but President Bashar al-Assad cannot be a party to any settlement, a communique drafted for an opposition meeting says.

The meeting of the 70-member Western, Arab and Turkish-backed coalition is taking place before Syrian Foreign Minister Walid al-Moualem is due for talks in Moscow, one of Assad's last foreign allies, and as U.N. mediator Lakhdar Brahimi renews efforts for a deal.

The opposition front convened in Cairo on a day when a car bomb jolted central Damascus, killing several people and incinerating cars on a busy highway close to the Russian Embassy and offices of the ruling Baath Party.

The Syrian Observatory for Human Rights, a Britain-based monitoring group, said the blast killed at least 31 people in the capital, which has been relatively insulated from the nearly two-year conflict that has killed around 70,000 people.

The draft SNC communique, seen by Reuters, omitted a direct demand for Assad's removal, in a softening of tone from past positions that insisted the president must go before there could be any negotiations.

The document said Assad and his cohorts must be held accountable for bloodshed, and that any peace deal must be under the auspices of the United States and Russia.

"Bashar al-Assad and the military and security apparatus commands are responsible for the decisions that have led the country to what it is now, are outside the political process and are not part of any political solution in Syria," it said.

"They have to be held accountable for the crimes they have committed."

The initiative comes from coalition president Moaz Alkhatib, a cleric from Damascus who played a role in the peaceful protest movement against Assad at the beginning of the uprising in 2011.

Alkhatib's supporters say the initiative has popular support inside Syria from people who want to see a peaceful departure of Assad and a halt to the war that has increasingly pitted Assad's Alawite minority sect, an offshoot of Shi'ite Islam, against Syria's Sunni Muslim majority.

But rebel fighters on the ground, over whom Alkhatib has little control, are generally against the proposal.

The Syrian Islamic Liberation Front, which represents armed brigades, said in a statement it was opposed to Alkhatib's initiative because it ignored the revolt's goal of "the downfall of the regime and all its symbols".

Veteran opposition campaigner Walid al-Bunni, a coalition member who supports Alkhatib, played down the omission of a direct mention of Assad's removal.

"We are demanding his accountability for the bloodshed and destruction he has wreaked. I think the message is clear enough," Bunni said.

Alkhatib formulated the initiative in broad terms last month after talks with the Russian and Iranian foreign ministers in Munich but without consulting the coalition, catching the umbrella organisation by surprise.

A powerful bloc in the coalition dominated by the Muslim Brotherhood, the only organised group in the political opposition, criticised the initiative as harming the revolution.

But a Brotherhood source said the group will not scuttle the initiative because it was confident Assad is not interested in a negotiated exit, which could help convince the international community to support the armed struggle for his removal.

"Russia is key," the source said, speaking on condition of anonymity. "We are showing the international community that we are willing to take criticism from the street but the problem is Assad and his inner circle. They do not want to leave."

Russia hopes Alkhatib will visit soon in search of a breakthrough. Bunni said Alkhatib would not go to Moscow without the coalition's approval and that he would not be there at the same time as Moualem.

Promoted
Listen to the latest songs, only on JioSaavn.com
"In my opinion Alkhatib should not go to Moscow until Russia stops sending arms shipments to the Assad regime," Bunni said.

Formal backing by the coalition to Alkhatib's initiative would give it more weight internationally and undermine Assad supporters' argument that the opposition is too divided to be considered a serious player, opposition sources said.
© Thomson Reuters 2013
Comments
Syria