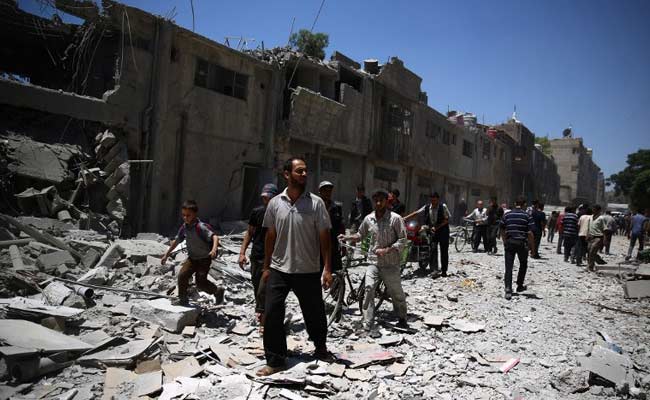 Syrians walk amidst the rubble of buildings in the rebel-held area of Douma, east of the Syrian capital Damascus, following reported air strikes by regime forces, on June 30, 2015. (AFP)

Beirut: At least 10 people, including two children, were killed in Syrian government air strikes on the rebel-held Damascus suburb of Douma today, a monitor said.

The Britain-based Syrian Observatory for Human Rights said another 50 people were injured in the strikes, adding the death toll was likely to rise because a number of the wounded were in serious condition and other residents missing under rubble.

An AFP photographer at a field clinic in the suburb saw the body of a young girl lying on a stretcher, with her hand protruding from under a makeshift shroud fashioned from a blanket.

Wounded people flooded into the clinic, with one man whose face was caked in white dust bleeding from the scalp through a gauze dressing.

Most of the floor was filled with the injured, some receiving treatment and others waiting, with the rare empty spaces smeared with blood.

Douma lies in the opposition bastion area of Eastern Ghouta, which has been subjected to continuous regime aerial bombardment for months.

Rebels regularly fire missiles into the capital Damascus from the region, but many civilians remain in the area as well.

Earlier in June, at least 24 people, including five children, were killed in government strikes and rocket fire on Douma as the UN's peace envoy Staffan de Mistura visited the Syrian capital.

Another nine people were killed in rebel rocket fire on Damascus on the same day.

De Mistura condemned that exchange of fire and urged civilians to be protected on both sides of the conflict, which began in March 2011 with anti-government protests.

Elsewhere in Syria on Tuesday, the Observatory said at least seven people were killed in government air strikes across Idlib province.

Most of the northwestern province is now under rebel control, after an alliance of opposition groups including Al-Qaeda's local affiliate evicted regime forces from their last strongholds.

More than 230,000 people have been killed in Syria since its conflict erupted.