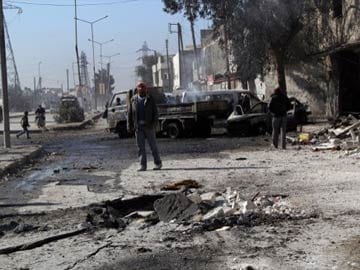 A man stands next to debris in the road following a reported Syrian government forces air strike in the northern city of Aleppo on February 8, 2014

The raids came as in the oil-rich east, the Al-Qaeda affiliate Al-Nusra Front and allied Islamist rebel groups launched a new offensive against the jihadist Islamic State of Iraq and the Levant (ISIL).

Hundreds of people have been killed in several waves of barrel bomb assaults, each lasting several days, since December 15, the Britain-based group says.

Thousands of people have fled the areas being targeted.

The raids come as government forces press an advance into the east and north of Aleppo city, large swathes of which fell to the opposition after a massive rebel offensive in July 2012.

Rights groups have condemned the regime's use of barrel bombs as indiscriminate.

On Saturday, helicopters also dropped barrel bombs on Daraya, a rebel bastion southwest of Damascus, which has been under siege for more than a year.

In a separate development, Al-Nusra Front and rebel brigades including the powerful Ahrar al-Sham launched a new offensive in the eastern province of Deir Ezzor against their erstwhile ally ISIL, the Observatory said.

While ISIL was once welcomed by rebels battling President Bashar al-Assad, abuses by the group turned much of the opposition against them.

Saturday's offensive comes just over a month after three massive rebel alliances declared war against ISIL in much of the north.

Both Al-Nusra and ISIL grew out of Al-Qaeda in Iraq, but have split in Syria.

More than 1,800 people, mostly fighters, died in January fighting between rebels and ISIL in northern Syria.

Promoted
Listen to the latest songs, only on JioSaavn.com
Both Deir Ezzor and Hasakeh are strategic because they lie on Syria's border with Iraq.

Deir Ezzor is a key conduit for ISIL to send weapons and fighters from Iraq into Syria.