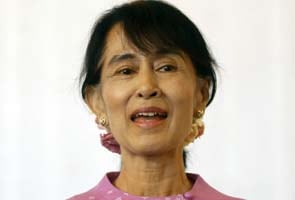 Yangon: Aung San Suu Kyi has declined to speak out on behalf of Rohingya Muslims and insisted she will not use "moral leadership" to back either side in deadly communal unrest in west Myanmar, reports said.

The Nobel laureate, who has caused disappointment among international supporters for her muted response to violence that has swept Rakhine state, said both Buddhist and Muslim communities were "displeased" that she had not taken their side.

More than 100,000 people have been displaced since June in two major outbreaks of violence in the state, where renewed clashes last month uprooted about 30,000 people.

Dozens have been killed on both sides and thousands of homes torched.

"I am urging tolerance but I do not think one should use one's moral leadership, if you want to call it that, to promote a particular cause without really looking at the sources of the problems," Suu Kyi told the BBC on Saturday.

Speaking in the capital Naypyidaw after talks with European Commission President Jose Manuel Barroso, who has said the EU is "deeply concerned" about the violence and its consequences for Myanmar's reforms, Suu Kyi said she could not speak out in favour of the stateless Rohingya.

"I know that people want me to take one side or the other, so both sides are displeased because I will not take a stand with them," she said.

The democracy champion, who is now a member of parliament after dramatic changes overseen by a quasi-civilian regime that took power last year, said the rule of law should be established as a first step before looking into other problems.

"Because if people are killing one another and setting fire to one another's houses, how are we going to come to any kind of reasonable settlement?" she said.

Myanmar's 800,000 Rohingya are seen by the government and many in the country as illegal immigrants from neighbouring Bangladesh.
They face severe discrimination that activists say has led to a deepening alienation.

The Rohingya, who make up the vast majority of those displaced in the fighting, are described by the UN as among the world's most persecuted minorities.