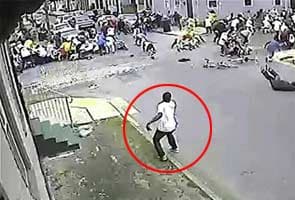 New Orleans: The suspect in a Mother's Day parade shooting that left 19 people wounded in New Orleans has been taken into custody, police said.

Akein Scott, 19, was arrested, yesterday in the Little Woods section of eastern New Orleans, police department spokeswoman Remi Braden said. She said no additional details were available and would not be until today morning.

It was not immediately clear whether Scott, who was arrested this past March, had been convicted on any of those charges.

Video released Monday showed a crowd gathered for the Sunday parade suddenly scattering in all directions, with some falling to the ground. They appear to be running from a man in a white T-shirt and dark pants who turns and runs out of the picture.

Promoted
Listen to the latest songs, only on JioSaavn.com
Police said they identified the suspect from the surveillance camera images.

Two children were among those wounded.