Superstorm Sandy responsible for at least 97 deaths in US, Canada 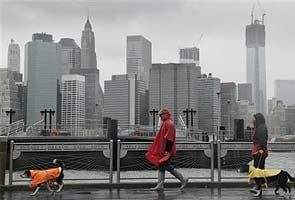 Deaths in the United States and Canada from Superstorm Sandy, the massive storm that hit the US East Coast this week, rose to at least 97 on Thursday after more fatalities were reported by officials in New York City, New Jersey and elsewhere.

The number of dead in New York City rose to 39, police said. At least 15 of the city's dead were found on Staten Island, whose southeast flank took the full brunt of the storm surge.

In New Jersey, authorities said the death toll in the state had reached 13 as search and rescue teams gained access to devastated areas.

The storm also killed at least 69 people in the Caribbean, including at least 54 in Haiti and 11 in Cuba, before hitting the US coast on Monday, authorities said.

The following are reported and confirmed North American deaths related to the storm. State authorities have warned the numbers are subject to change and could go up or down. A decrease may occur if the cause of death is later deemed not to be a direct result of the storm.

* The captain of HMS Bounty, a tall ship that sank 125 miles (201 km) off the southeast coast of Hatteras, North Carolina, is still missing. Massachusetts state police said a traffic accident that killed one man during the time of the storm was not related to the storm or weather.
© Thomson Reuters 2012
Comments
Sandy