At Least 4 Dead As Super Typhoon Mangkhut Hits The Philippines

Roughly four million people were in the path of destruction the storm slashed through the northern tip of Luzon island, leaving at least four dead. 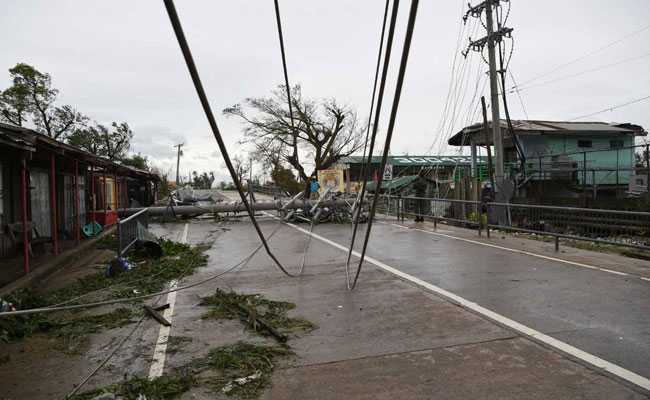 Super Typhoon Mangkhut smashed through the Philippines on Saturday, as the biggest storm to hit the region this year claimed the lives of its first victims and forced tens of thousands to flee their homes.

Roughly four million people -- a quarter of whom live on a few dollars a day -- were in the path of destruction that the storm slashed through the northern tip of Luzon island, leaving at least eight dead.

"As we go forward, this number will go higher," Ricardo Jalad, head of the national civil defence office, told reporters, referring to the death toll.

The extent of the storm's destruction only beginning to be known later on Saturday, with reports of dozens of rain-soaked hillsides collapsing, torrents of out-of-control floodwaters and people being rescued from inundated homes.

Just over 105,000 people fled their homes in the largely rural, agricultural region, which is one of the nation's top producers of corn and rice.

Mangkhut was packing sustained winds of 160 kilometres (105 miles) per hour and gusts of up to 195 km per hour as it hurtled across the sea toward China's heavily populated southern coast.

The dead were six people killed in landslides, a girl who drowned and a security guard crushed by a falling wall. In addition to the eight killed in the Philippines, a women was swept out to sea in Taiwan.

'End of the world'

"Among all the typhoons this year, this one (Mangkhut) is the strongest," Japan Meteorological Agency forecaster Hiroshi Ishihara told AFP on Friday.

"This is a violent typhoon. It has the strongest sustained wind (among the typhoons of this year)."

Survivors were traumatised by the confrontation with the monster typhoon.

"It felt like the end of the world... that was stronger than Lawin", said Bebeth Saquing, 64, using the local name for Super Typhoon Haima, which was one of the most powerful storms of 2016.

"I did not sleep," she told AFP by phone from her home, which stood up to Mangkhut's pounding.

The country's deadliest on record is Super Typhoon Haiyan, which left more than 7,350 people dead or missing across the central Philippines in November 2013.

As the storm is on pace to hit China's southern coast on Sunday, Cathay Pacific warned travellers that it expects more than 400 flight cancellations over the next three days.

At the same time, the Hong Kong government said Mangkhut will pose "a severe threat to the region", with many residents in the city and neighbouring Macau stocking up on food and supplies.

The president of Taiwan, Tsai Ing-wen, told citizens to be ready as powerful waves struck pounded it shore.

"The typhoon is powerful and even it's not expected to make a landfall in Taiwan, we should be well prepared and not... take it lightly," she wrote on Facebook.