"We build our products in a neutral way," Sundar Pichai said in one exchange with a lawmaker, and added later: "We approach our work without any political bias." 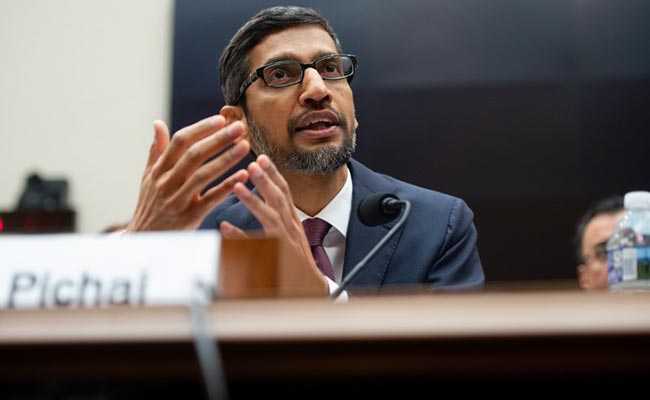 "We build our products in a neutral way," Pichai said in one exchange with a lawmaker, and added later: "We approach our work without any political bias."

Pichai was called to the House Judiciary Committee following a series of attacks by President Donald Trump and his supporters claiming that Google and other internet platforms were suppressing conservative voices, despite persistent denials from the companies.

The hearing on Google's "data collection, use and filtering practices" offered an opportunity for lawmakers to confront the CEO over claims that the internet giant skews its search results for political reasons.

Google angered lawmakers earlier this year by refusing to send a top executive to a similar hearing with Facebook and Twitter.

The latest hearing comes with Silicon Valley under fire over privacy practices and manipulation, including by foreign governments, and possible monopoly practices.

Committee chairman Bob Goodlatte said it would be "sinister" for Google to manipulate its search engine because of its vast ability to control information people see online.

"The American people deserve to know what kinds of information they are not getting when they are doing a search on the internet," Goodlatte said.

Pichai, dressed in a dark suit, calmly responded to questions, repeating on several occasions that the company seeks to serve a range of viewpoints without bias.

He took on Republican Representative Lamar Smith of Texas, who said it was "irrefutable" that Google's search results were biased. Pichai replied that "providing users with high-quality and trusted information is sacrosanct to us... we find we have a wide variety of sources including from the left and the right."

He said search algorithms reflect factors such as "relevance, freshness (and) popularity," and added that "we try to reflect what is newsworthy, what is currently being discussed."

Trump earlier this year took aim at Google, tweeting that search results were "rigged" against him, promoting negative stories from media outlets he considers "fake news."

What does Google know?

Pichai also faced comments and questions about Google's data collection and privacy practices, and its discussions on creating a search engine that could be used in China.

Goodlatte commented that the tech giant "is able to collect an amount of information about its users that would even make the NSA (National Security Agency) blush," and said the company needed to be more transparent about what it does with location and other data on Android-powered devices.

Pichai said the data collected would depend on the applications installed and privacy options chosen.

"We remind users to do a privacy checkup and we make it very obvious... they can clearly see what information we have," he said.

He also sought to deflect criticism over "Project Dragonfly," a hotly contested project that could offer a search engine that could satisfy Chinese censors.

"Right now we have no plans to launch in China," he said.

The tech CEO also sought to allay concerns that Google was snubbing American values through its decision this year to drop out of the bidding for a major Pentagon cloud computing project.

"Even as we expand into new markets we never forget our American roots," he said in his prepared testimony.

(Except for the headline, this story has not been edited by NDTV staff and is published from a syndicated feed.)
Comments
Sundar PichaiGoogle