Sun Chunlan is the only female vice premier in China's entrenched patriarchy, the sole woman on its powerful 25-member Politburo and, more recently, the top official overseeing its pandemic control. 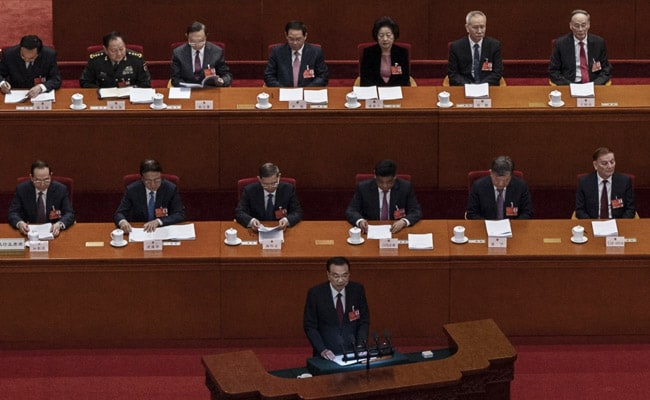 Sun Chunlan is the only female on China's powerful 25-member Politburo.

Among the resources President Xi Jinping has deployed to arrest surging Covid deaths in Hong Kong is the Communist Party's pandemic fighter: a 71-year-old woman whose career at the near-top illuminates the glass ceiling in the world's most populous country.

Sun Chunlan is the only female vice premier in China's entrenched patriarchy, the sole woman on its powerful 25-member Politburo and, more recently, the top official overseeing its pandemic control. Now, she's been marshaled to help across the Hong Kong border, local media including the South China Morning Post have reported.

Unlike the "nice guy" cadres Xi derides for failing to act, Sun's pandemic response has been portrayed in state media as decisive. After Xi'an hospitals left non-Covid patients to die during a lockdown this year, she ordered medics on the ground to "not turn away patients under any excuse." When Covid-19 emerged in Wuhan, the septuagenarian spent almost 100 days there without vaccines helping authorities isolate each case, a strategy pivotal to Beijing's unparalleled success in holding back the virus. 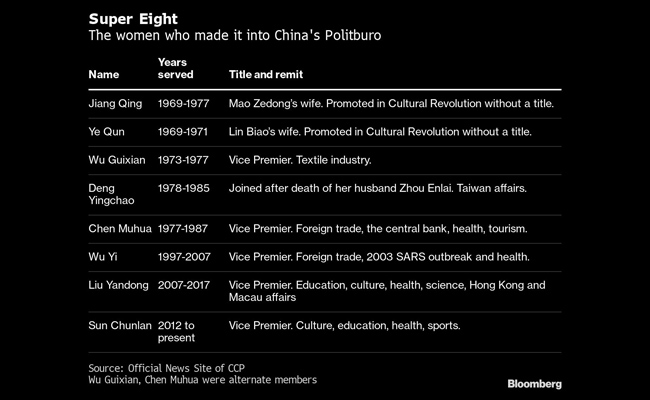 "This is not a game of hide-and-seek, it must be implemented resolutely," she told a room of mostly male cadres at the time, pumping her fist, in rare footage of an internal meeting posted by local media. In another clip, she called hospitals on a mobile phone to find beds. "How many are you able to take in? Three hundred? Very good," she said, wearing a thick down jacket and N95 mask.

Sun's age will likely force her to retire after a reshuffle later this year and leave the Zhongnanhai leadership compound in Beijing. She'll step down without a clear female successor and having been snubbed from China's innermost sanctum of power, the Standing Committee - a seven-member boys' club no woman has ever been admitted to.

"The system has been grossly unfair for Sun Chunlan," said Victor Shih, an associate professor at the University of California San Diego who researches elite Chinese politics. "She was identified in the 1980s as a promising cadre. After serving in provincial and central party leadership positions, she'll end her career in the Politburo when many male colleagues with thinner qualifications have entered the Standing Committee."

The lack of female representation in China's government has gained greater attention after a series of scandals spotlighting women's issues. The National People's Congress, which held its annual meeting this week in Beijing, is considering an update to the country's gender discrimination law, but was likely to leave unclear the punishment for violating women's rights. 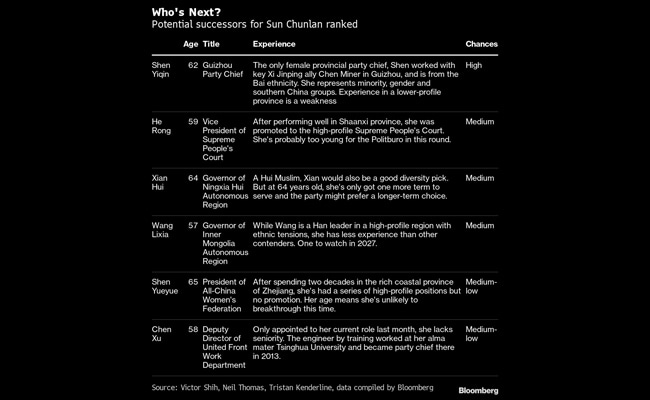 Unlike Xi, Sun wasn't born into a family with high-level Communist Party connections. She worked her way up the party ranks from a watch factory floor to lead China's eighth-richest province, Fujian, and then the port city Tianjin. In 2012, she became one of just eight women out of some 160 people to ever reach the Politburo - including alternate members - since the founding of People's Republic of China in 1949.

But while her predecessor in Tianjin, Zhang Gaoli - later accused of pressuring tennis star Peng Shuai into sex - was catapulted from that post into the Politburo's Standing Committee, Sun never advanced further in the party ranks. Instead, in 2018 she was made vice premier and assigned the seemingly low-profile portfolios of health and sport, while her male counterparts headed climate and trade.

"Very little effort, if any at all, has been made to reform the gender stereotypes underpinned by old Confucian ideas and the deep-seated political culture favoring men in party promotions," said Valarie Tan, analyst at the Berlin-based Mercator Institute for China Studies.

As the country grapples with a looming demographic crisis, women are increasingly being portrayed primarily as care givers and child-bearers, she added. Xi has said women's "unique physical and mental features" give them a special role in families, according to a compilation of his comments on family values published in the party's Study Times in 2018.

The country's #MeToo movement has been squashed for being a vehicle spreading Western values. Peng's allegations of mistreatment by the party's No. 7 official were wiped from China's heavily censored internet. The recent case of a chained woman who had been trafficked caused nationwide outcry, and sparked an investigation.

"Rather than creating more space for women's issues in China, the MeToo movement and Peng Shuai's case have reminded the leadership of the importance of keeping control over information and politics in China," said Natasha Kassam, a former Australian diplomat in China who is now director of the Lowy Institute's public opinion and foreign policy program. "The men in Zhongnanhai worry that other women could speak up."

In that environment, the path to power for women has narrowed. In the 1970s and 1980s, women headed ministries of chemical industry, textiles, foreign economic relations, and even the central bank - seen as fast tracks for promotions - according to a Bloomberg News analysis. More recently, they've been assigned to steering education, propaganda, health and the United Front that influences overseas Chinese, Shih said.

Tristan Kenderdine, research director at consultancy Future Risk, said the Chinese Communist Party was forged on the prototypes of urban Russian society in the early 20th century that allowed only nominal female participation in politics. "More than a century after its formation, the CCP is still adhering to this 1920s experimental tokenism," Kenderdine said.

"This is unlikely to change as the Party retrenches further into political conservatism," he added.

While China's cabinet pledged in a September report to increase the proportion of women in the legislature, top political advisory body, and leadership above county levels, no targets were set. "There's a long way to go to improve women's participation in national and social governance, and to raise awareness of gender equality," the State Council report said, underscoring the rarity of Sun's position.

In recent days, she has been giving instructions "at both macro and micro levels" on Covid control from Beijing via a video link, HKO1 said.

"Sun's experience shows that female leaders are just as capable as men," said Neil Thomas, a Chinese politics and foreign policy analyst at Eurasia Group. "But the Communist Party does not provide women with equal opportunities to rise through its ranks."

"It is not an equal opportunity employer," he added.