Tens of thousands of well-wishers waving the country's flag lined the streets and cheered as Sultan Hassanal Bolkiah, the world's second-longest reigning monarch, passed by in a chariot 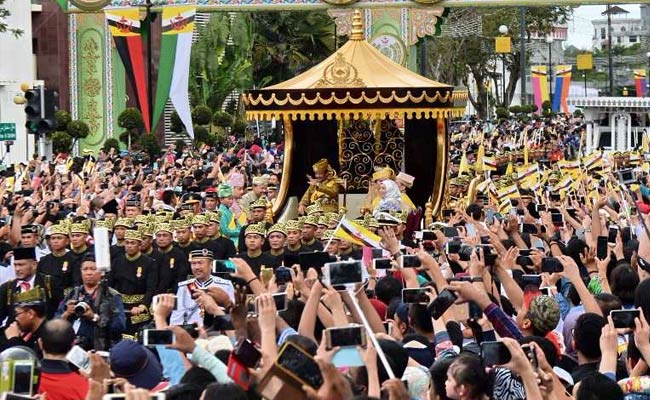 Sultan Hassanal Bolkiah is the 29th sultan of Brunei.

Brunei: Brunei's all-powerful and fabulously wealthy sultan marked 50 years on the throne in spectacular style Thursday, travelling in a gilded chariot through the streets and holding a tradition-filled ceremony at his golden-domed palace.

Tens of thousands of well-wishers waving the country's flag lined the streets and cheered as Sultan Hassanal Bolkiah, the world's second-longest reigning monarch, passed by in a chariot pulled by dozens of his subjects.

Marching bands took part in the colourful procession as it made its way through the streets, the highlight of about two weeks of celebrations to mark the golden jubilee of one of the world's wealthiest men.

An absolute monarchy with strict Islamic laws, Brunei is one of the world's wealthiest nations thanks to abundant oil and gas reserves.

Among the crowds was Melissa Ibrahim, an airline employee, who said she was grateful to Sultan Hassanal Bolkiah for ensuring the people of the tiny sultanate were well looked after.

"His majesty cares about the people, their welfare, education and heath," she told AFP.

"Everything is subsidised by the government, so for that we are very, very thankful." 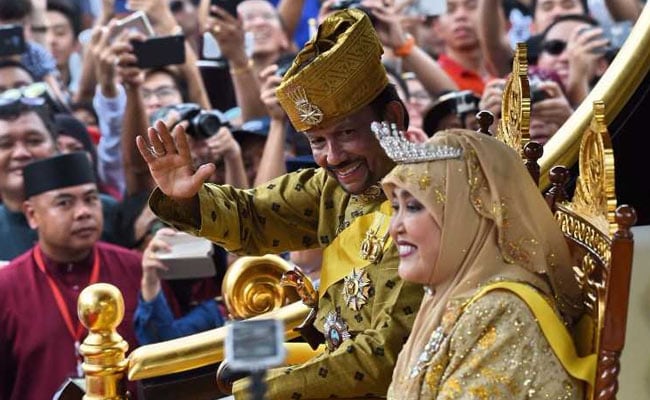 Sultan Hassanal Bolkiah was accompanied by his wife Anak Hajah Saleha on the chariot.

Celebrations got underway earlier at the sultan's sprawling palace, where an honour guard performed a 21-gun salute and the ruler and his wife sat on golden thrones for a royal audience.

The 71-year-old ascended to the throne of the Muslim country perched on the north of tropical Borneo island in October, 1967.

He is the 29th sultan of Brunei from a royal family that has ruled the country continuously for over 600 years.

His decades in charge of one of the world's few absolute monarchies have seen the country gain full independence from Britain and living standards soar to among the highest in the world due to its huge energy reserves.

But his reign of Brunei, which has a population of about 4,00,000, has also been marked by controversies.

These include the introduction of tough Islamic laws in 2014, and a sensational family feud which revealed details of his brother Prince Jefri Bolkiah's jet-set lifestyle, including allegations of a high-priced harem and a luxury yacht he owned called "Tits".

Still, the jubilee was a chance for citizens to focus on the positive aspects of Hassanal's rule as well as a rare source of excitement in the sleepy sultanate, which is known for its slow pace of life and lack of nightlife -- alcohol is largely banned under Islamic practice.

Thursday's festivities began with Hassanal, dressed in yellow and gold royal finery and accompanied by his wife Anak Hajah Saleha, inspecting a guard of honour in the grounds of his palace, before the gun salute.

The couple then held the royal audience in the throne room of the palace, a vast complex of resplendent white buildings with golden domes and almost 1,800 rooms, attended by hundreds of guests including members of the royal family ministers.

The sultan and other members of the royal family travelled through the streets in a convoy of Rolls-Royces before boarding the golden chariot, known as the Usongan Diraja, which has long been used for royal ceremonies in Brunei.

The festivities will continue Friday when Southeast Asian leaders and Middle Eastern royalty attend a banquet to mark the jubilee.

The sultan only comes behind one sovereign in terms of having the longest reign -- Britain's Queen Elizabeth II, who ascended to the throne in 1952.

Promoted
Listen to the latest songs, only on JioSaavn.com
She became the world's longest serving monarch a year ago following the death of Thailand's King Bhumibol Adulyadej, whose reign spanned seven decades.