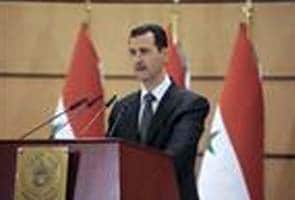 Beirut: An Islamist suicide car bomber killed at least 50 Syrian security men in Hama province on Monday, an opposition group said, in what would be one of the bloodiest single attacks on President Bashar al-Assad's forces in the 20-month-old uprising.

Another day of relentless violence in Syria coincided with more unity talks in Qatar among opposition factions.

Rami Abdelrahman, head of the Syrian Observatory for Human Rights, said the centre was used by security forces and pro-Assad militia as one of their biggest bases in the area.

"A fighter from the Nusra Front drove his car to the centre and then blew himself up," he said. "A series of explosions followed. At least 50 were killed."

The Nusra Front, an Al Qaeda-inspired group of ultra-orthodox Salafi Muslims, has claimed responsibility for several suicide bombings in Damascus and elsewhere in the past. It operates mostly independently of other rebel factions, some of which have criticised it for indiscriminate tactics.

Syrian officials often blame foreign-backed Islamist militants for the anti-Assad revolt, in which about 32,000 people have been killed since it began in March 2011.

In Damascus, a car bomb exploded in the mostly Alawite western district of Mezzeh 86, killing 11 people and wounding dozens more, including children, state media and the Syrian Observatory reported.

An Islamist group calling itself Seif al-Sham claimed responsibility for the attack, which it said targeted a meeting point for the army, police and pro-Assad militia.

Warplanes, tanks and artillery battered rebel-held parts of southern Damascus in what one Western diplomat said was an escalation in the government campaign to crush the insurgency. Opposition activists said at least 10 people were killed there.

An air strike on Haram, a town in the northwestern province of Idlib near the Turkish border, killed at least 20 rebels of the Idlib Martyrs' Brigade, probably including their commander, Basil Eissa, the Syrian Observatory said.

Much of Idlib province is in the hands of insurgents, but remains vulnerable to air power, used increasingly by Assad's forces to contain his mostly Sunni Muslim opponents.

In Qatar, divided Syrian opposition groups were meeting to try to forge a cohesive leadership that would then make common cause with rebel factions fighting on the ground, in an effort to gain wider international recognition and arms supplies.

The Syrian National Council (SNC), the largest overseas-based opposition group, was expected to expand its membership to 400 from 300 and to elect a new leader and executive committee before talks with other anti-Assad factions in Doha this week.

The Syria conflict has also divided big powers, with Russia and China opposing Western calls for Assad's removal and critical of patchy outside efforts to arm his opponents.

Rebels have few weapons to counter warplanes and artillery, but Western nations have been wary of supplying anti-tank or anti-aircraft missiles without a credible opposition leadership.

That has given the Syrian military a free hand, with densely populated Damascus suburbs hit by air and ground bombardments that have killed hundreds of people in the last three weeks.

Witnesses said artillery deployed on Qasioun, a mountain that overlooks Damascus, was pounding southern neighbourhoods and warplanes were firing rockets. Tanks were also in action.

Activist Rami al-Sayyed, speaking from southern Damascus, said rebels had made hit-and-run attacks on pro-Assad militiamen in the city overnight before retreating to nearby farmland.

In one attack, rebels fought pro-Assad militiamen in Nisreen, a southern district mainly populated by members of Assad's minority Alawite sect, an offshoot of Shi'ite Islam.

They also hit positions of the Popular Front For the Liberation of Palestine-General Command (PFLP-GC), a Syrian-sponsored faction, in the nearby Yarmouk refugee camp, where 20 people were reported killed by army shelling on Sunday. At least seven PFLP-GC members were killed in the latest fighting.

The Syrian conflict has aggravated divisions in the Islamic world, with Shi'ite Iran supporting Assad and U.S.-allied Sunni nations such as Saudi Arabia, Turkey and Qatar backing his foes.

"We do not side with any faction in Syria's internal battle," Lavrov was quoted as saying.