Chase Dekker, who is also a marine biologist, took the spectacular shot during a whale-watching boat trip off the coast of Monterey Bay, in California, last week. 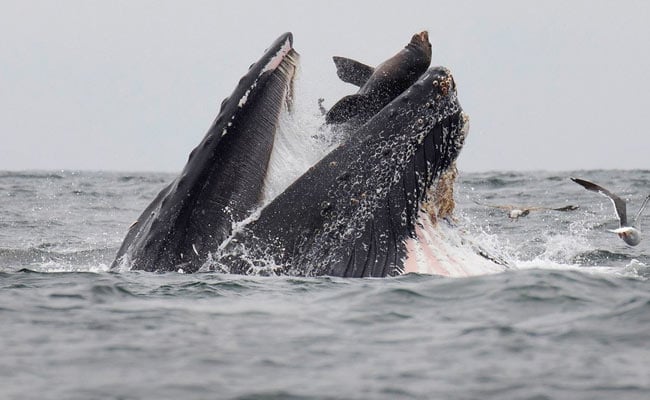 In a stunning photo, a wildlife photographer has captured a sea lion falling into the mouth of a humpback whale in what he calls a "once-in-a-lifetime" moment.

Chase Dekker, who is also a marine biologist, took the spectacular shot during a whale-watching boat trip off the coast of Monterey Bay, in California, last week.

"I get to see a lot of crazy stuff but never this," said the 27-year-old who has been taking pictures of wildlife for nearly a decade.

He said he was on a whale-watching boat trip on July 22 when he noticed a group of humpback whales on a feeding frenzy.

As the animals were munching on anchovies, an unlucky sea lion failed to get out of the way in time and ended up inside the whale's mouth, Dekker recounted in interviews and an Instagram post.

He said he quickly grabbed his camera and began snapping pictures of the incredible moment.

"I was ecstatic because I captured a moment I may never see again," he said.

But rest assured, Dekker said, the whale never closed its jaws on the sea lion which was probably very shaken by the experience but managed to swim away.

"That sea lion had the true 'Jonah Experience'," he said on Instagram.

(Except for the headline, this story has not been edited by NDTV staff and is published from a syndicated feed.)
Comments
WhaleSea Lion