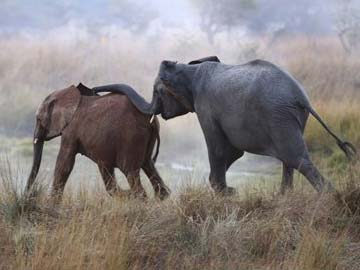 In this photo taken Tuesday June 10, 2014 and supplied by International Fund For Animal Welfare (IFAW), an orphaned elephant calf, left, one of two, is introduced to an adult at the Game Rangers International Release Facility at the Kafue National Park in

Geneva: More than 20,000 elephants were poached last year in Africa where large seizures of smuggled ivory eclipsed those in Asia for the first time, international wildlife regulators said on Friday.

Eighty percent of the African seizures were in Kenya, Tanzania and Uganda, three of the eight nations required to draw up plans to curb ivory smuggling, officials with the Convention on International Trade in Endangered Species of Wild Fauna and Flora (CITES) reported.

The report says poaching is increasing in Central African Republic, but declining in Chad. But CITES, which regulates 35,000 species of plants and animals and which banned ivory trade in 1989, says the overall poaching numbers in 2013 dropped from the previous two years.

"We are seeing better law enforcement and demand-reduction efforts across multiple countries, as well as greater political and public attention to this unfolding crisis," said John Scanlon, the CITES secretary-general.

Promoted
Listen to the latest songs, only on JioSaavn.com
About 28 percent of Africa's elephants are in eastern Africa, but most of them - close to 55 percent - are in southern Africa. Some populations of elephants continue to face an immediate threat of local extinction.