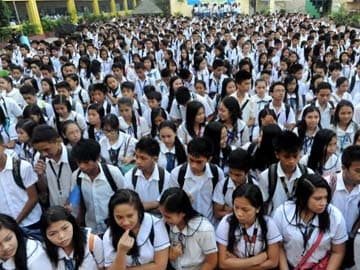 Students attend a flag raising ceremony before singing the national anthem at a government school in Manila on June 2, 2014

Tacloban: Tens of thousands of students in the central Philippines began the school year on Monday in steamy tents and other makeshift classrooms, seven months after Super Typhoon Haiyan devastated the region.

The government said it had hoped to rebuild or repair 20,000 classrooms before students returned, but new regulations requiring higher building standards so schools withstand future typhoons led to delays.

"These are the birth pangs of making sure that resiliency... would be the basis for better structures," presidential spokesman Edwin Lacierda said in Manila.

"In the meantime, the students will be studying in structures which are not yet resilient, but we hope for their understanding."

At the Panaluran Central School in Tacloban, a coastal city which bore the brunt of the typhoon, hundreds of sweat-soaked children crammed into three temporary classrooms made from steel frames and corrugated iron sheets as the temperature outside hit 30 degrees Celsius (86 Fahrenheit).

"It is pitiful to see them packed like sardines," said housewife Gina Villamor as she anxiously waited for her children, aged 6 and 10, to finish their first day at school.

"It is so hot in there. And there is no electric fan."

Haiyan, the most powerful typhoon ever recorded on land, left more than 7,000 people dead as it tore across the central Philippines in November last year.

More than 1,000 schools in the typhoon zones were damaged or destroyed, according to the education cluster head of the UN Children's Fund (UNICEF) in Tacloban, Manan Kotak.

He told AFP between 80,000-100,000 children were expected to return to schools on Monday in the central areas that Haiyan battered, about half of them in Tacloban.

Panaluran school principal Asela Refuerzo said teaching the 820 students who had enrolled would be a huge challenge, with a lack of toilets just one of the many problems.

"It will be difficult for them to learn if this lasts," Refuerzo said.

Presidential spokesman Lacierda and an education department official contacted by AFP said they could not give a timeline for when the schools would be rebuilt.

Promoted
Listen to the latest songs, only on JioSaavn.com
Officials have previously said it will take many years and billions of dollars to fully rehabilitate the typhoon-hit areas, made up mostly of farming and fishing communities that were already among the poorest in the Philippines.

Hundreds of thousands of people continue to live in makeshift shelters, while many damaged or destroyed hospitals are still not functioning properly.

The 33-Year-Old Fatwa Against Salman Rushdie