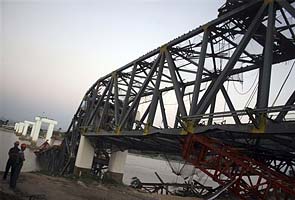 Yangon: A strong earthquake struck an underdeveloped mining region in northern Myanmar, collapsing a bridge and a gold mine, damaging ancient Buddhist pagodas and leaving as many as 12 people feared dead.

A slow release of official information left the actual extent of the damage unclear after Sunday morning's magnitude-6.8 quake. Myanmar has a poor official disaster response system and lost upward of 140,000 people to a devastating cyclone in 2008.

The nation's second-biggest city of Mandalay is the nearest major population center to the main quake but reported no casualties or major damage. Mandalay lies about 117 kilometers (72 miles) south of the epicenter near the town of Shwebo, and the smaller towns in the area were worse hit.

The region is a center for mining of minerals and gemstones, and several mines were reported to have collapsed. The region is underdeveloped, and casualty reports were coming in piecemeal, mostly from local media.

The evening news on state television showed Vice President Sai Maul Hkam visiting the town of Thabeikyin, where the report said damage included 102 homes, 21 religious buildings, 48 government offices and four schools. The town, a gold-mining center, is near the quake's epicenter and had casualties of three dead and 35 injured. The report brought total officially confirmed casualties to six killed and 64 injured.

Independently compiled tallies suggested a death toll of about a dozen.

The US Geological Society reported a 5.8-magnitude aftershock later Sunday, but there were no initial reports of new damage or casualties.

State television warned residents that aftershocks usually follow a major earthquake and told people to stay away from high walls, old buildings and structures with cracks in them.

The biggest single death toll was reported by a local administrative officer in Sintku township - on the Irrawaddy River near the quake's epicenter - who told The Associated Press that six people had died there and another 11 were injured.

He said some of the dead were miners who were killed when a gold mine collapsed. He spoke on condition of anonymity because local officials are normally not allowed to release information to the media.

Rumors circulated in Yangon of other mine collapses trapping workers, but none of the reports could be confirmed.

According to news reports, several people died when a bridge under construction across the Irrawaddy River collapsed east of Shwebo. The bridge linked the town of Sintku, 65 kilometers (40 miles) north of Mandalay on the east bank of the Irrawaddy, with Kyaukmyaung on the west bank.

The website of Weekly Eleven magazine said four people were killed and 25 injured when the bridge, which was 80 percent finished, fell. The local government announced a toll of two dead and 16 injured. All of the victims appeared to be workers.

However, a Shwebo police officer, also speaking on condition of anonymity, said just one person was confirmed dead from the bridge's collapse, while five were still unaccounted for.

"This is the worst earthquake I felt in my entire life," Soe Soe, a 52-year-old Shwebo resident, told The Associated Press by phone.

She said that the huge concrete gate of a local monastery collapsed and that several sculptures from another pagoda in the town were damaged.

Other damage was reported in Mogok, a major gem-mining area just east of the quake's epicenter. Temples were damaged there, as were some abandoned mines.

"Landslides occurred at some old ruby mines, but there were no casualties because these are old mines," Sein Win, a Mogok resident, said by phone.

State television reported that more than a dozen pagodas and stupas in five townships were damaged, and many of them had their so-called "umbrellas" atop the dome-shaped structures crash down.

The uppermost parts of the domes usually contain encased relics of the Buddha and small Buddha images, and sometimes jewels. Damage to them is taken as an especially bad omen.

Sein Win said police were guarding a damaged stupa in Mogok and its exposed relics.

Many people in Myanmar are superstitious, and it is likely that soothsayers will point out that the quake occurred on the 11th day of the 11th month.

State television also reported that the tremors shifted the Mingun Bell, which people in Myanmar claim is the world's largest functioning bell, off its base. The nearly 4-meter-high (12-foot-high) bell, which weighs in at 90 metric tons (200,000 pounds), was installed in 1810 and is a popular tourist attraction at a pagoda outside Mandalay.

A resident of Naypyitaw, which is 365 kilometers (225 miles) south of the quake's epicenter, said several windowpanes of the parliament building had broken.

The epicenter is in a region frequently hit by small temblors that usually cause little damage. Myanmar suffered a quake of similar size in March last year near the northeastern border town of Tachileik. Last year's 6.8 magnitude quake killed 74 people and injured 111.

Residents of Mandalay contacted by phone said they were fearful of more aftershocks because the city has modern high-rise buildings that could trap people, unlike the mostly small structures in the areas worst hit on Sunday.

The quake was felt in Bangkok, the capital of neighbouring Thailand.

It comes just a week ahead of a scheduled visit to Myanmar by President Barack Obama. He will be the first U.S. president to visit the one-time pariah nation, which is emerging from decades of military rule.

The disaster is the second to strike Myanmar's north in three days. On Friday, a tanker train derailed about 128 kilometers (80 miles) north of Shwebo, and at least 25 people were killed when overturned carriages burst into flames as they were trying to skim fuel from them.
Comments
Myanmar quake