Prosecutors highlighted the boozy outing during the ongoing trial of Insys Pharmaceutical executives, who are accused of using kickbacks and dodgy tactics 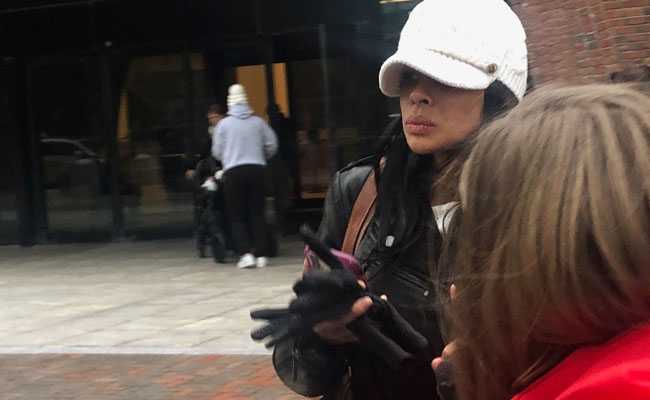 Physician Paul Madison is suspected of taking more than $70,000 in bribes from a drug company to churn out prescriptions for its highly addictive fentanyl spray. But on Tuesday, prosecutors wanted jurors to focus more on what, exactly, the pain management specialist was doing at "Chicago's sexiest nightclub" with an exotic dancer-turned-pharmaceutical executive named Sunrise wriggling around on his lap.

Prosecutors highlighted the boozy outing Tuesday during the ongoing trial of Insys Pharmaceutical executives, who are accused of using kickbacks and dodgy tactics to get doctors to increase prescriptions of Subsys, their fentanyl spray that can be 100 times more potent than morphine.

The spray had been approved by the FDA for treating the worst pain of terminal cancer patients with few other options. But Insys, prosecutors say, increased its bottom line by getting doctors to write "off-label" prescriptions for other types of patients who didn't need the drug.

It was all in the name of profit, prosecutors said. According to the New York Times, "a single patient using the drug can produce six figures of revenue." Meanwhile, more than 900 people have died while using Subsys since it was approved in 2012.

Prescribing a highly addictive opioid in any but the most dire cases should spark concern in any doctor's mind. To quiet those Hippocratic alarm bells, prosecutors and court documents say, Subsys' pharmaceutical sales team used a playbook that included a sizable helping of the seven deadly sins.

They hired attractive sales reps in their 20s and 30s and encouraged them to stroke doctors' hands while "begging" them to write prescriptions, Mother Jones reported. The company offered doctors hefty speaking fees, often for events attended only by buddies and people who worked in their practices. In court documents, prosecutors gave the fees another name: Kickbacks. And how frequently a doctor participated in the company's lucrative speaker program was allegedly based on how frequently doctors wrote Subsys prescriptions.

They "do not need to be good speakers, they need to write a lot of [prescriptions]," former Insys sales executive Alec Burlakoff told a colleague, according to the documents.

According to CBS News, Insys made 18,000 payments to doctors in 2016 - a total of more than $2 million that went to headache doctors and back pain specialists.

Madison, who ran a pain clinic in Illinois, was one of the company's top targets.

In court documents, one Insys sales rep wrote: "Dr. Madison runs a very shady pill mill that only accepts cash. He is extremely moody, lazy and inattentive. He basically just shows up to write his name on the prescription pad, if he shows up at all."

The criminal justice system also had a negative opinion of the doctor. According to Reuters, Madison was convicted in November of defrauding insurers into paying for chiropractic procedures that were never performed. They were unrelated to the Insys case.

But the company paid him thousands in speaker fees even after he was indicted, the New York Times reported. Over a three-year period, he accounted for 58 percent of the sales of Subsys in Illinois.

Prosecutors say Lee took a close interest in his practice. She was a former dancer at a Florida strip club who was hired as a sales executive despite having no academic degree. Her management experience involved running an escort service, prosecutors said. She rose to become Insys Therapeutics' regional sales director.

Holly Brown, the Insys sales rep who recounted the lap dance story to federal jurors, testified that Lee frequently wore low-cut tops around Madison. During their initial lunch, court documents say, Lee handed the doctor her business card and "told him to call if he wanted to discuss the Fentanyl Spray 'in private.' "

After one dinner in mid-2012, Brown said she, Lee and Madison went to a club, where she witnessed Lee "sitting on [Madison's] lap, kind of bouncing around."

"He had his hands sort of inappropriately all over her chest," Brown said.

But whatever happened at the Underground strip club was about more than just one sales rep's commission. As the Times reported, sales of the pricey fentanyl spray made Insys a Wall Street darling - before some of its top executives were charged with federal crimes.

They have argued that prosecutors are trying to make an example of Insys, a small segment of the pharmaceutical industry they say is unfairly maligned by a government trying to show it is making a dent in the opioid crisis, according to the Associated Press

And on Tuesday, their attorneys sought to discredit Brown's testimony.

They asked whether her memory of the events that night could be foggy because she had been drinking.

She replied that everyone at the strip club that night - the doctor, the regional sales director, the sales rep - had been drinking.

(Except for the headline, this story has not been edited by NDTV staff and is published from a syndicated feed.)
Comments
Insys PharmaceuticalSubsys