"We intend on using all legal means at our disposal to uncover the truth about the cover-up and what happened," Michael Avenatti, Daniels' attorney who signed the letter, said in a statement. 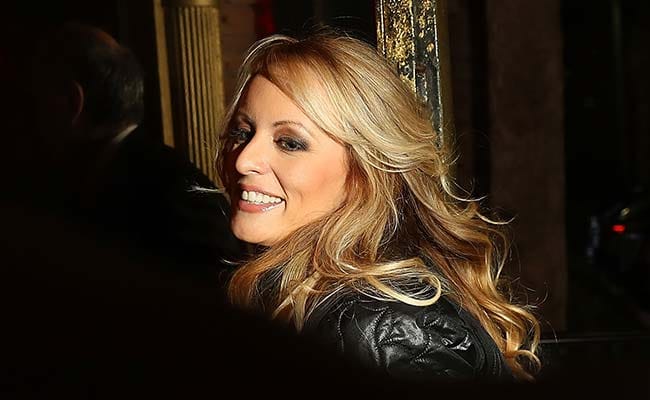 Daniels has said in her earlier interviews with journalists that she slept with Trump in 2006. (File)

Attorneys for Stormy Daniels, the adult film star who has said she was paid to remain silent about an affair with President Donald Trump before he took office, wrote letters on Thursday to the Trump Organization and two banks asking them to preserve messages, documents and financial records they say relate to that payment.

These requests come as Daniels has sued Trump in an effort to escape the nondisclosure agreement she signed shortly before the 2016 presidential election, one of multiple ongoing legal cases involving women who say they want to speak out about the president. She argued that the agreement - negotiated with Michael Cohen, Trump's lawyer - is void because the then-Republican candidate never signed it.

In a letter to the Trump Organization's chief legal officer, Alan Garten, Daniels' attorney argued that the company has "unmistakable links" to the lawsuit and asked the business to retain any messages Cohen exchanged regarding Daniels, along with banking records, account histories and text messages or emails that could relate to Trump and Daniels' alleged relationship.

Garten did not immediately respond to a request for comment about the letter.

"We intend on using all legal means at our disposal to uncover the truth about the cover-up and what happened," Michael Avenatti, Daniels' attorney who signed the letter, said in a statement. "And this is but one of many tools we will use. When we are done, the truth will be laid bare for the American people."

The letter to the Trump Organization also claimed that in February, Cohen "attempted to interfere" with Daniels' ability to hire a new attorney - Avenatti, an aggressive lawyer she hired earlier this year who has sought to push the deal into the public eye. Avenatti declined to comment further, and Cohen did not immediately respond to a message seeking comment about the letter or Avenatti's claim.

Cohen argued last week that he has the right to seek at least $20 million in damages from Daniels, arguing that she violated the nondisclosure agreement 20 times.

Avenatti also sent letters Thursday to City National Bank and First Republic Bank asking them to retain records relating to the payment, including data and documents referring to the source of the $130,000 payment; any correspondence with federal investigators; information on Cohen's accounts; and messages involving Trump's relatives, his campaign and Cohen relating to the payment.

A representative for First Republic Bank declined to comment. City National Bank did not respond to a request for comment.

Daniels's lawsuit is one of the court cases involving Trump and women that churned forward recently and could present him with legal and political complications. On Tuesday, a judge ruled that a former "Apprentice" contestant's defamation lawsuit against Trump could proceed, while a former Playboy playmate filed her own lawsuit saying that she wanted to be freed to discuss her own alleged affair with Trump.

In recent weeks, the saga of Trump and Daniels - whose real name is Stephanie Clifford - has remained a fixture in the news, although the White House has declined to address it. After the agreement was first reported by the Wall Street Journal in January, Daniels began to speak publicly, though she did not directly comment on the affair she had recounted to journalists in 2011 and 2016.

Daniels has said in court filings and her earlier interviews with journalists that she slept with Trump in 2006 while he was a reality television star appearing at a celebrity golf tournament. In her lawsuit, Daniels alleged that she wanted to speak publicly about this before the 2016 election, but then she signed the agreement and received the $130,000 payment just days before Trump was elected president.

Cohen, who had initially dismissed reports about the transaction, eventually acknowledged using his own money to "facilitate" the payment. Cohen has not publicly explained what the payment was for, and he has said he was not reimbursed by the Trump Organization or the Trump campaign. The White House has pushed back at the suggestion that Trump approved the payment.

Daniels' lawsuit was initially filed in Los Angeles Superior Court before being moved to the U.S. District Court for the Central District of California.

(This story has not been edited by NDTV staff and is auto-generated from a syndicated feed.)
Comments
Stormy DanielsStormy Daniels Donald Trump