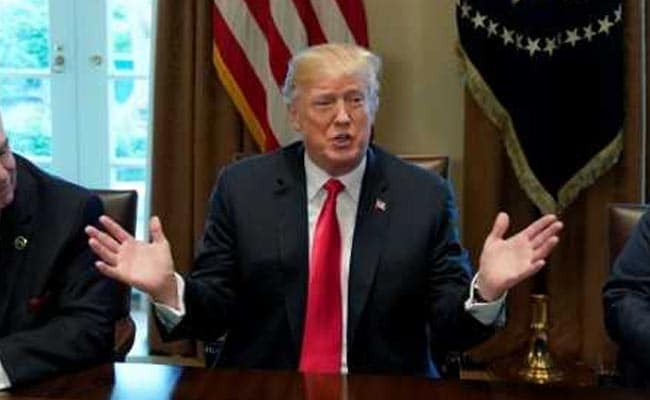 TOKYO: Stock markets in Asia on Friday extended a Wall Street rout, as investors were spooked by the spectre of a global trade war after President Donald Trump announced the United States would impose hefty tariffs on steel and aluminium imports.

Trump said duties of 25 percent on steel and 10 percent on aluminium would be formally announced next week, sparking concerns of retaliatory moves from major trade partners like China, Europe and neighbouring Canada in a blow to the global economy.

"The world stands on the brink of a trade war as Donald Trump announces severe tariffs on steel and aluminium - forget the yield curve - this is how recessions start," said Robert Carnell, head of research, Asia-Pacific at ING In Singapore.

"Trade is just about the only thing economists are agreed on - more is better."

For the week, they are down 2.3 percent and 3.6 percent respectively.

Toyota Motor shares were down 2.4 percent as the automaker said the planned tariffs would substantially raise costs and therefore prices of cars and trucks sold in America.

Mainland Chinese shares recouped some of the opening losses, with the Shanghai composite index down just 0.4 percent.

On Wall Street, the S&P 500 lost 36.16 points, or 1.33 percent, to 2,677.67 on Thursday, coming a day after investors sold off heavily on worries the Federal Reserve might increase rates more than expected this year.

Trump's latest trade salvo comes after Washington slapped steep tariffs on imports of solar panels and washing machines in January, prompting China to launch an anti-dumping and anti-subsidy investigation into imports of sorghum from the United States.

The anxiety over tit-for-tat moves was underscored by Canada's quick response, with officials in Ottawa saying they will retaliate against any U.S. tariffs on steel and aluminium products.

With markets fretting about the pace of U.S. rate hikes this year, the worry is that escalating trade protectionism would dent world growth and corporate earning, key drivers of a rally in equities last year.

The concerns of a harmful trade war eclipsed the upbeat U.S. economic data published on Thursday, including a rise in the manufacturing index to 14-year highs and another showing the number of Americans filing for unemployment benefits hitting a 48-year low.

U.S. inflation picked up as the PCE price index, a gauge of underlying inflation, advanced 0.3 percent in January - the largest gain since January 2017. On the year, it posted an increase of 1.5 percent, in line with the previous two months.

"Even if you manufacture goods, if someone doesn't buy them, you have to scale back your production, leading to slowdown in global economic activities," said Daisuke Uno, chief strategist at Sumitomo Mitsui Bank.

"I would expect markets entered another period of correction," he added.

U.S. Treasury yields fell as the risk of a trade war appeared to push aside considerations of inflation, a major theme that spooked global financial markets earlier this year.

The 10-year U.S. Treasuries yield fell to 2.811 percent, hitting its lowest level in three weeks and further extending the distance from its four-year peak of 2.957 percent touched on Feb 21.

Some say, on the other hand, markets may be over-reacting.

"Trump has been repeatedly boasting about rise in share prices. If this is going to lead to a sustained drop in sharp prices, I bet he is likely to change his stance," said Nobuyuki Kashihara, head of research at Asset Management One.

In the currency market, the dollar's rebound following the bullish comments on the U.S. economy from new Federal Reserve Chair Jerome Powell on Tuesday lost steam.

The dollar index is still down 2.1 percent this year, dogged by suspicions that the Trump administration prefers a weaker dollar to mend its bulging trade deficit. Worries that Trump's big tax cuts and spending plans will ramp up fiscal deficits to the extent that they undermine confidence in U.S. debt have also hurt the greenback.

Oil prices were also under pressure, having fallen more than one percent the previous day on the trade spat concerns.

(Except for the headline, this story has not been edited by NDTV staff and is published from a syndicated feed.)
Comments
Stock marketsDonald TrumpWall Street