Stephen Hawking's Office And Archive To Be Preserved In UK

British astrophysicist Stephen Hawking's papers and a diverse range of personal items have been acquired by Cambridge University and a UK museum group. 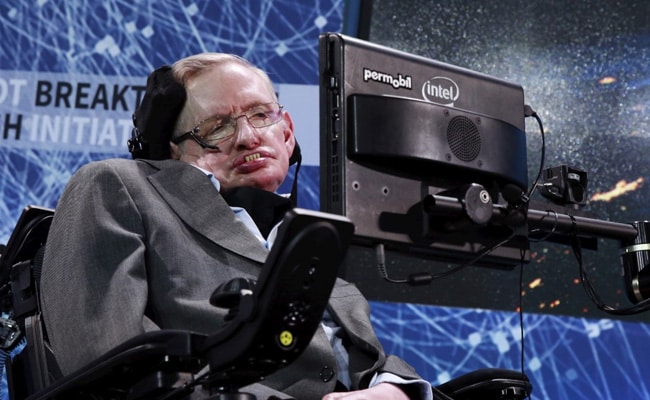 Stephen Hawking's belongings have been acquired by Cambridge University and a UK museum.

Papers and a diverse range of personal items belonging to the late British astrophysicist Stephen Hawking have been acquired by Cambridge University and a UK museum group.

Under an agreement between Cambridge University Library, the Science Museum Group and the UK government, the entire contents of the world-renowned scientist's office and archive will be preserved for future generations.

The Euro 4.2 million ($5.9 million, 4.8 million euros) deal means 10,000 pages of Hawking's scientific papers and other documents will remain in the university city of Cambridge in eastern England where he died in 2018.

Objects including his wheelchairs, speech synthesisers, and personal memorabilia including his entire Cambridge office will be housed at London's Science Museum and selected highlights will go on display next year.

The Cambridge archive, which includes documents dating from 1944 to 2008 including his academic papers and TV scripts from appearances on shows like "The Simpsons", will be housed alongside papers from Isaac Newton and Charles Darwin.

The ashes of Hawking, who died in March 2018, aged 76, were interred alongside the graves of Newton and Darwin in London's Westminster Abbey.

Hawking, a theoretical physicist, dedicated his life to unravelling the mysteries of the universe, including the nature of time and space -- relativity -- and quantum theory, how the smallest particles behave.

He popularised the obscure science surrounding the governing rules of the universe and black holes in his best-selling 1988 book "A Brief History of Time".

As his stature grew, he became an instantly recognisable popular figure. Motor neurone disease left him using a wheelchair and unable to speak except through a voice synthesiser.

However, the rare amyotrophic lateral sclerosis (ALS) that gradually robbed him of mobility did nothing to dull his mind or trademark wit.

"We are very pleased that these two important institutions will preserve our father's life's work for the benefit of generations to come and make his legacy accessible to the widest possible audience," his children Lucy, Tim and Robert Hawking said in a statement.

"Our father strongly believed that everyone should have the chance to engage with science so he would be delighted that his legacy will be upheld by the Science Museum and Cambridge University Library," they added.

Cambridge University librarian Jessica Gardner said it was "profoundly important" his archive was preserved in the city where "alongside the work of his hero, Newton, and so many other scientists".

"It's a really important part of the legacy," she added.