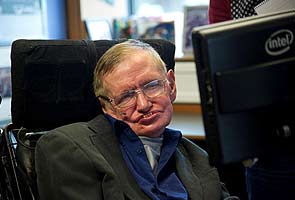 London: Cosmologist Stephen Hawking tells the extraordinary tale of how he overcame severe disability to become the most famous living scientist in a new documentary film premiered in Britain today.

"This film is a personal journey through my life," the 71-year-old Briton said in the trailer to "Hawking", which he co-wrote and narrated in his distinctive, computer-generated voice.

He adds: "I have lived five decades longer than doctors predicted. I have tried to make good use of my time."

The film tells in Hawking's own words and those of his family and friends how a bright student with a fondness for partying became a pre-eminent physicist who has helped unlock the secrets of the universe, from the Big Bang to black holes.

He brought the wonders of the cosmos to millions of people through his lectures and bestselling book, "A Brief History of Time", becoming a household name who even starred in "The Simpsons".

All this was achieved despite being diagnosed with amyotrophic lateral sclerosis (ALS), a form of motor neurone disease, when he was just 21, and being told he had only a few years to live.

"Although I have been successful in my work, my life has had its fair share of challenges," Hawking says.

The film goes back to Hawking's childhood and his student days before the ALS began to attack the nerves controlling his voluntary movement, confining him to a wheelchair and forcing him to speak through a machine.

It features interviews with his family, including his first wife Jane Wilde, with whom he had three children. "Falling in love gave me something to live for," Hawking says.

And it follows him as he travels around the world giving lectures about space and time, refusing to give in to the disease which has locked his mind inside his body.

"Because every day could be my last, I have the desire to make the most of each and every minute," he says.

The 90-minute film had its world premiere at the SXSW festival in Texas in March, but the scientist himself will attend the first British screening on Thursday in Cambridge.

Promoted
Listen to the latest songs, only on JioSaavn.com
Hawking has spent his career at the University of Cambridge, where he was Lucasian Professor of Mathematics from 1979 to 2009, a post previously held by Isaac Newton.