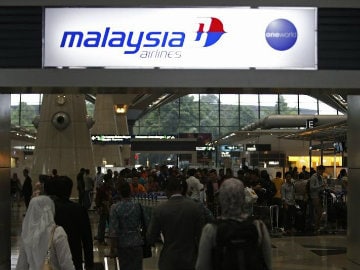 Passengers queue up at the Malaysia Airlines ticketing booth at the Kuala Lumpur International Airport.

A de-listing would pave the way for Khazanah to revive the ailing carrier, possibly by selling off its profitable engineering, airport services or budget airline units, trimming its bloated payroll and installing a new management team.

At the current price, majority shareholder Khazanah would need to pay only 1.07 billion ringgit ($333.65 million) for the 30.6 percent of shares it does not already own, according to Reuters calculations.

The restructuring and potential sale of MAS is politically fraught due to heavy opposition to job losses from its powerful labour union, which has hampered previous revival plans, and its status as Malaysia's national flag-carrier.

Khazanah's board, chaired by Prime Minister Najib Razak, is expected to meet at the end of July to discuss the plan, one of the people said, adding that an announcement would be made by the end of this year.

The sources declined to be identified because of the sensitivity of the issue.

The state investor is working with CIMB Investment Bank on the restructuring, the sources added, but cautioned that the plan, and its details, are subject to change depending on the ultimate decision by the government.

Media relations officials at MAS and CIMB were not immediately available for comment on Thursday.

Khazanah said last month it was considering all options and would unveil plans within 6-12 months to restructure the airline, which has been squeezed into three straight years of losses by intense competition locally and on long-haul flights.

Hit by slumping ticket sales in the wake of the baffling disappearance of MH370 on March 8, the company turned in its worst quarterly performance in two years in the January-March period and is currently burning through its operating cash. Its shares have fallen 16 percent since the disappearance compared to a 2.8 percent gain in the benchmark stock exchange index.

Asked to comment on the privatisation plan on Wednesday, a Khazanah official said the fund had nothing to add to its June statement.

Taking MAS private could enable Khazanah to restructure it with little interference from shareholders and the powerful airline union, analysts say.

Resistance to previous restructuring efforts by the union, which represents a workforce of around 20,000, has hampered the airline's efforts to cut costs and improve competitiveness in the face of fast-growing, low-cost carriers such as AirAsia Bhd and Indonesia's largest private airline, Lion Air.

The head of the MAS labour union, however, was recently quoted by local media as saying he would support a privatisation if a new leadership was brought in.

"This (privatisation) will remove pressure from the public, from politicians to the unions, hence focusing on its turnaround," said a Kuala Lumpur-based equity analyst who covers MAS but who declined to be identified by name because of the sensitivity of the issue.

Mahathir Mohamad, Malaysia's longest serving prime minister and an influential politician, was quoted in local media as saying that taking MAS private was the best option to enable a radical restructuring from top to bottom.

Khazanah should exit MAS upon privatisation and the airline should be run by those who can work with the union to revive its fortunes, he suggested.

Khazanah has injected more than 5 billion ringgit into MAS over the last 10 years, but a series of recovery plans and leadership changes failed to revive its fortunes.

The state fund tried to cut its stake in the airline in 2012 in a share swap deal with AirAsia, but the main union - Malaysia Airline System Employees Union - successfully blocked a move that would have brought in a profitable airline with experience of competing aggressively.

Privatisation also has the advantage of being relatively cheap for Khazanah, which owns 69.4 percent of MAS, thanks to the airline's 83 percent tumble in market value over the past five years. The broader Malaysian market has risen nearly 75 percent during the same period.

MAS would have a "break-up" value of 4.15 billion ringgit, well above its current market value of 3.4 billion ringgit, Maybank Research said in an April report. The airlines' profitable units include MAS Engineering, Airport Terminal Services and its budget airline unit Firefly.

Sources involved in discussions told Reuters in May that the airline and its key stakeholders were in talks with banks for a strategic overhaul that could include the partial sale of the engineering unit and an upgrade of its ageing fleet.

Bankers said declaring MAS bankrupt was not a decision the government would likely favour as it could harm the airline's chances of selling off the profitable units.

Promoted
Listen to the latest songs, only on JioSaavn.com
Analysts say the airline is set to post another weak performance in April-June as it continues to struggle with flight cancellations, weak passenger yields and high overheads.($1 = 3.2070 Malaysian Ringgit)