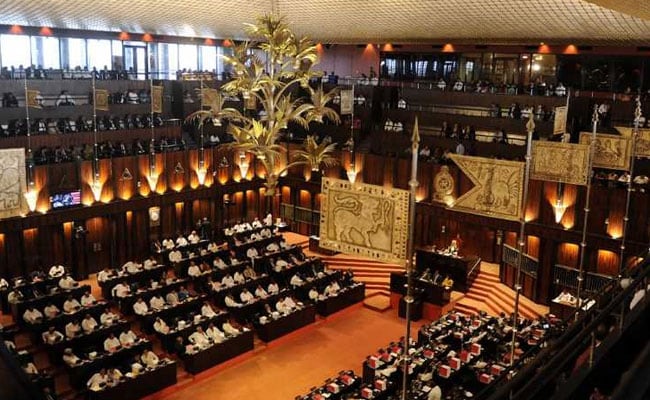 Sri Lanka has been gripped by an unprecedented constitutional crisis. (AFP)

Sri Lanka's main parties on Monday challenged in the highest court the president's sacking of parliament, a move which has escalated a political crisis and deepened international alarm.

Three parties, which together enjoy an absolute majority in the assembly, on Monday asked the Supreme Court to declare the president's actions as illegal.

"The petitions were accepted this morning and it is up to the Chief Justice to decide when it will be taken up for hearing," a court official said.

He said several civil society groups and individuals too had submitted separate petitions, all seeking a declaration against the presidential action against the legislature.

"I have watched over the last two weeks as the executive branch has seized the rights and usurped the powers of members of parliament who were elected to represent the people," he said.

"We must all act with patriotism and independence to safeguard the future of democracy in our country."

The same day, Sirisena said violent clashes among rival MPs could have led to "civil unrest" across the country if the legislature had met as scheduled this week.

"Had I allowed the parliament to meet on November 14, there would have been violence in the House and it could have spread to our villagers and towns," Sirisena said in his first address to the nation since the crisis erupted on Friday.

"I acted to prevent civil unrest."

Sirisena's rivals maintain that he had no constitutional power to sack the assembly until it completed four-and-a-half years of its five-year term that ends in August 2020.

Only China has recognised the appointment of Rajapakse, who during his decade as president relied heavily on Beijing for both diplomatic and financial support as the West shunned him over his human rights record.

The United States has led a chorus of international voices expressing concern over threats to democracy on the island of 21 million people strategically located in the Indian Ocean.

Election monitors have questioned the legality of the snap poll announced by Srisena.

The People's Action for Free and Fair Elections said it had already asked the independent Elections Commission to seek an opinion from the attorney general and an order from the Supreme Court.