Beijing's gains in Sri Lanka could make up for perceived loss of China's influence in Maldives, where a recent election turfed Ex-President Abdulla Yameen, who had also moved closer to China at the expense of relations with India. 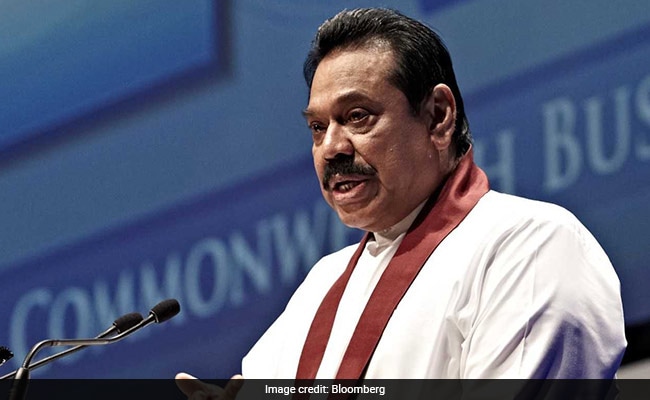 A leadership struggle in Sri Lanka is the latest skirmish in the broader battle for influence in South Asia between India and China and has left the tiny island nation -- already heavily indebted to Beijing -- in the midst of an escalating constitutional crisis.

The decision to reappoint Rajapaksa -- who ruled between 2005 and 2015 -- is expected to have regional impact, with his ties to China and history of borrowing heavily from Beijing to fund infrastructure projects. The return of Rajapaksa may also dent New Delhi's influence in Colombo, given Wickremesinghe's attempts to re-balance Sri Lanka's foreign relations away from China and toward India and Japan.

"China is once again emerging as Colombo's last hope," said Shailesh Kumar, Asia director at political risk firm Eurasia Group, who predicts Rajapaksa will re-open the door to Chinese funding. "This transition will ensure that China can once again prevail over Sri Lanka's economy as they have a friend in the prime minister's office -- in contrast to Wickremesinghe."

The developments in Sri Lanka play into broader rivalry between India and China across the Indian Ocean. Beijing's potential gains in Sri Lanka could make up for the perceived loss of Chinese influence in the tiny archipelago nation of Maldives, where a recent election turfed former President Abdulla Yameen, who had also moved closer to China at the expense of relations with India.

"We call on all parties to act in accordance with Sri Lanka's constitution, refrain from violence, and follow due process," the U.S. State Department said on Twitter. "We expect the government of Sri Lanka to uphold its Geneva commitments to human rights, reform, accountability, justice, and reconciliation."

"The only alternative open to me was to invite former President Mahinda Rajapaksa and appoint him as prime minister to form a new government," Sirisena said in a statement released on Sunday. "I extend an open invitation to all 225 honorable members of parliament to join the new government."

As the political jockeying continued, former petroleum minister Arjuna Ranatunga's security guard was arrested after two people were injured when he fired shots at a crowd of Rajapaksa supporters at the headquarters of state-run Ceylon Petroleum Corp., local media reported.

Rajapaksa, who remains enormously popular in Sri Lanka, has a controversial past. He led a final assault on minority Tamil separatists sending the country's brutal 26-year civil war in 2009 that was criticized by human-rights, groups and foreign governments.

He also took numerous loans from China to fund large infrastructure projects, including the construction of a port in southern Hambantota -- his own political constituency -- that lost money and was eventually sold to a state-owned Chinese firm in a debt-to-equity swap on a 99-year lease. Roughly 80 percent of Sri Lanka's total government revenues go toward paying debt.

Although it was Rajapaksa-era loans that sank Sri Lanka into debt, the decision to hand the port back to China was made by Wickremesinghe -- and was roundly criticized. In a sign of how fraught relations were among Sri Lanka's two top leaders, Wickremesinghe was forced to defend himself against a no-confidence vote that was backed in part by Sirisena's party. He defeated the motion.

There was a general sense that Wickremesinghe wasn't steering the economy properly, and his replacement by Rajapaksa is likely to prove popular with the general public, said Sanjeewa Fernando, a strategist at CT CLSA Securities in Colombo. The federal budget may also be delayed as a result of this move, he added.

"There was this notion that nothing is being executed properly," Fernando said. "It has to do with sentiment. There is a general excitement for change."

With Sri Lanka still reeling under debt payments and global market turmoil making international financing less likely, the appointment of Rajapaksa could ensure a steady source of capital from China at a time when few other countries are interested in investing there, Eurasia's Kumar said.

Wickremesinghe said at a press conference on Saturday that he still commanded the majority backing in parliament and called for a special session of the legislature to prove it. He's likely to challenge his removal as unconstitutional in the courts.

Calls to both Wickremesinghe and Rajapaksa's offices went unanswered.

"Life is a fight. We should not worsen the situation" of the people of Sri Lanka, Wickremesinghe told reporters. His comments came as political parties jostled for power.

Mahinda Amaraweera, general secretary of Sirisena's United People's Freedom Alliance, told MTV news television that the party decided to quit the unity government due to "economic troubles" and questions of national security, including an alleged plot to assassinate Sirisena.

With Friday's defection, Rajapaksa and Sirisena have the backing of about 95 parliamentarians in Sri Lanka's 225-seat legislature. A simple majority of 113 is needed to show that the prime ministerial candidate has the confidence of parliament.

Wickremesinghe has the backing of 106 MPs (including eight MPs of the Sri Lanka Muslim Congress, six MPs of Mano Ganesan's Tamil Progressive Alliance and five MPs of Rishard Bathiuddin's All Ceylon Makkal Congress). The Tamil National Alliance, which has yet to comment on who it will back, has 16 seats and the Marxist JVP, which condemned the President's move to appoint Rajapaksa, has six.

Manoj Joshi, distinguished fellow at the New Delhi-based Observer Research Foundation, said India has important equities in Sri Lanka and China has developed new ones. "Neither can afford to simply walk away. So, there will be competition, but it's up to the Sri Lankans to manage this to their own benefit, rather than allow it to consume them."