The men in Parliament pushed and jostled each other. Some punched one another while others were seen tumbling down the stairs from the podium. 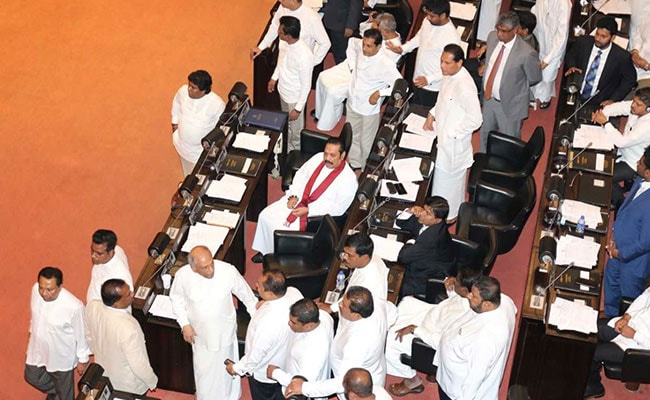 Mahinda Rajapaksa said in Parliament he had stepped into the prime ministership to rescue Sri Lanka.

Sri Lankan lawmakers scuffled in Parliament today, a day after a no-confidence motion was passed against now disputed Prime Minister Mahinda Rajapaksa, in the latest escalation of the political crisis that has left the country without an agreed Prime Minister or Cabinet.

The session in the morning was abandoned after Mr Rajapaksa's supporters rushed at Parliament's Speaker Karu Jayasuriya after he upheld the motion.

"According to the no-confidence vote held yesterday, there is no Prime Minister or Cabinet of ministers as of now as all those posts are invalidated by the vote," he told Parliament.

Following his remarks, a wastepaper basket, a folder and a copy of the Constitution were thrown at him, according to a report in Daily Mirror.

The men in Parliament pushed and jostled each other. Some punched one another while others were seen tumbling down the stairs from the podium.

The no-trust motion was passed yesterday, the first session of the Sri Lankan Parliament since the beginning of a constitutional crisis on October 26 when President Maithripala Sirisena sacked Ranil Wickremesinghe and replaced him with former strongman Mahinda Rajapaksa as the Prime Minister.

In a speech in Parliament today, Mr Rajapaksa said he had stepped into the prime ministership to rescue the country from Mr Wickremesinghe's "poor and corrupt leadership", not out of a hunger for power.

"Even though the prime ministership and the presidency is a big deal to you, it's not for me.

"When the President hands the country over to us in order to prevent a major catastrophe from taking place, it is our duty to accept that responsibility. I suggest that we take this matter before the 15 million-plus voters in the country instead of trying to resolve it among the 225 persons sitting in this house," he said.

After the speech, the Speaker attempted to hold a vote for MPs to endorse or reject the remarks, but was unable to do so after MPs loyal to Mr Rajapaksa rushed to approach his chair, were resisted by Mr Wickremesinghe's supporters and the fighting broke out.

Mr Rajapaksa loyalist Dilum Amunugama got hurt as he tried to take the Speaker's microphone, bloodying his shirt. He was later admitted to hospital, the media reported.

The Speaker, Mr Rajapaksa and Mr Wickremesinghe all eventually left the chamber as the fighting continued.

Harsha de Silva, an MP from Mr Wickremesinghe's United National Party, said the violence was "the most shameful day in Parliament". The party later held a rally in Colombo's Lipton Square against the "suppression of democracy".

They carried signs reading "Abolish the executive presidency" and "Chase away the rogue Cabinet".

"Fake Prime Minister, better listen to the people and respect democracy. You have no confidence in the Legislature. Go for God's sake, Go!," Mr De Silva tweeted.

Mr Wickremesinghe told the crowd: "Take this message to your villages. We will take this fight for democracy to every village."

Around the same time, Mr Rajapaksa announced he was lowering the cost of fuel from midnight -- both an assertion of his disputed power and an attempt to rally support around his leadership, according to the Guardian.

The Parliament was adjourned till tomorrow afternoon due to the chaos.