Sri Lanka Town Was Suspicious Of Newcomers, Then Mayhem As Hideout Raided

On Friday, at least 15 people, including six children, were killed in bomb blasts and gunfire as Sri Lankan security forces closed in on suspected terrorists 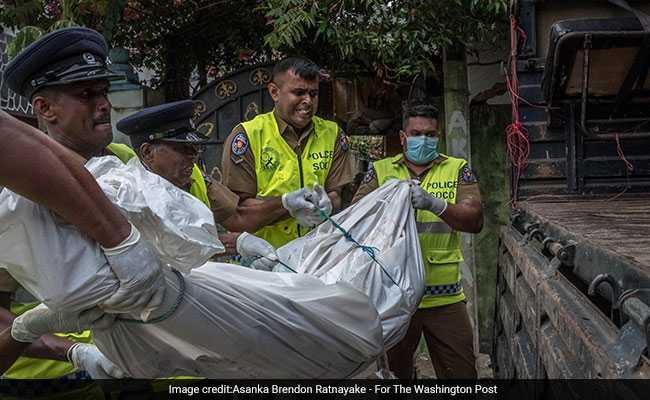 Police carry the remains of a suspected terrorist in Sainthamaruthu

They arrived a day or two after the Easter Sunday bombings and moved into a low-slung house behind a high wall and black metal gate, unloading boxes from a pale gray minivan.

But the neighbors in the seaside town of Sainthamaruthu soon began to suspect that something wasn't right. Finally, a group of local residents asked the new arrivals - men, women and children - to leave town.

Within hours, the quiet lane was turned into a war zone.

On Friday, at least 15 people, including six children, were killed in bomb blasts and gunfire as Sri Lankan security forces closed in on the house. Police believe the fiery explosions were triggered deliberately - the final violent acts of a group whose hideout had bombmaking items and black backpacks. Their preparations pointed to just one thing: possible plans for the next steps in a campaign of terror that began April 21 with bombings at churches that claimed more than 250 lives.

The identities of those killed in Sainthamaruthu were not immediately known or released. On Saturday, after the chaos, crime scene personnel in fluorescent vests roamed the area around the home collecting metal pellets, torn pieces of clothing and fragments of flesh.

The confrontation on Sri Lanka's eastern shore - on the other side of the island from the capital, Colombo - came amid a nationwide security crackdown and searches for suspects across the country. Police have deployed new emergency powers to stop and question individuals and to conduct raids.

But the events that flushed out the suspects in Friday's raids involved something simpler: neighborhood intuition.

It began when Imam Lateef, 54, the vice chairman of the nearby Hijra Mosque, received a call from the landlord who had rented the home to the group. The landlord was worried about the people in the house. Their behavior was suspicious, Lateef said, and the landlord wanted them to leave.

Lateef and several other members of the mosque walked over to the house, along a canal crowded with lotus plants.

The man who answered the door said that the family was from Kattankudy, the hometown of Zahran Hashim, the mastermind of the attacks, and the base of National Thowheed Jamaath, the Islamist extremist group Hashim founded. The mosque delegation politely asked them to leave by the following day. 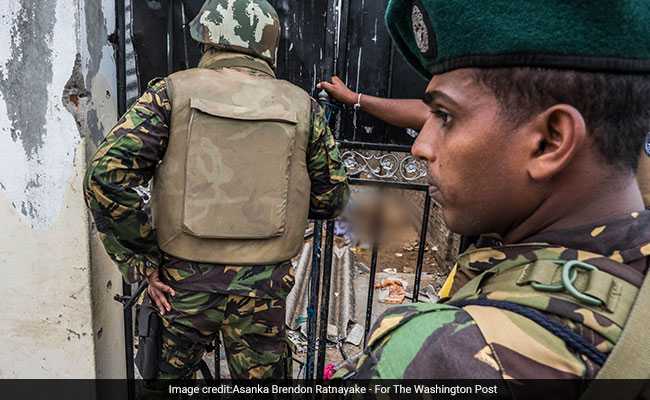 Army personnel outside the home rented by suspected terrorists in Sainthamaruthu

Meanwhile, after Friday prayers, Mohammed Rizwan, a local shopkeeper, was chatting with a group of friends about the new arrivals. They had heard they were from Kattankudy and resolved to check them out.

When Rizwan went by in the early evening Friday, he said that a man at the house told him to get out and pointed a gun at his chest. Rizwan took off running, grabbing the nearest police officer he could find - a local traffic cop.

A second blast followed. Then a third. But this time, special police units and soldiers were on the scene.

The blasts blew a hole in the roof and wall of the house, sending tiles flying. The security forces exchanged gunfire with a man carrying an AK-47 rifle. He was shot dead.

Amid the confusion, security forces also shot at three people in an auto-rickshaw that failed to heed warnings to stop, injuring two and killing one. It turned out the trio had no connection to the house or the attacks.

Earlier on Friday, police had raided a house about three miles from the rented home. There they found a cache of explosives, police said, plus the clothing and flag used by the Easter Sunday bombers to record a video professing allegiance to ISIS.

When the authorities entered the home in Sainthamaruthu at dawn on Saturday, they found the charred bodies of children in a corner of the room. They also discovered two survivors. An injured woman and toddler were taken to the hospital.

Outside, the body of the man shot by the security forces - identified only as "Niyaz" by a local police official - still lay face down on the cobbled pavement as flies buzzed around the corpse. Ripped pieces of clothing were scattered on the ground together with bullet casings. Torn sheaves of paper with the hadith - the sayings of the prophet Muhammad - were strewn in two places.

In the still, humid air, crime scene personnel climbed ladders and began to scour the house's roof for evidence. Meanwhile, police officers took two white plastic sheets and created a makeshift body bag, hoisting a corpse into the back of a navy blue police truck.

Nearby, hundreds of local residents had spent the morning sheltering at a school while they waited to be able to return to their homes. The entire town of Sainthamuruthu was under a curfew, with all roads closed and all shops shuttered.

Sri Lankan President Maithripala Sirisena said Friday that strict new measures were being taken to identify and track people, similar to hard-line methods used during the civil war between separatist ethnic Tamils and the government that ended in 2009.

He said that about 70 individuals suspected of ties to ISIS had been arrested, and that an additional 70 suspects were at large. On Saturday, the National Thowheed Jamaath, the Islamist extremist group linked to the Easter attacks, was banned.

"We had to declare an emergency situation to suppress terrorists and ensure a peaceful environment in the country," the president said. "Every household in the country will be checked" and lists of all residents made to "ensure that no unknown person can live anywhere."

ISIS claimed responsibility for the raid in Sainthamaruthu, saying three of its suicide bombers had lured police officers into an ambush and detonated explosives. No police were killed in the confrontation.

Rizwan, the shopkeeper, expressed a sense of pride at his actions a day earlier.

"I feel like I did a brave thing when I went to see what was happening," he said. Perhaps, he added, this would mark the end of the terror that has stalked Sri Lanka in recent days.

(Except for the headline, this story has not been edited by NDTV staff and is published from a syndicated feed.)
Comments
Sri Lanka blastsSri Lanka raids