Becca Lewis, who researches online subcultures and media manipulation, said the video's sharing showed how such memes had become a potent force for political expression and propaganda. 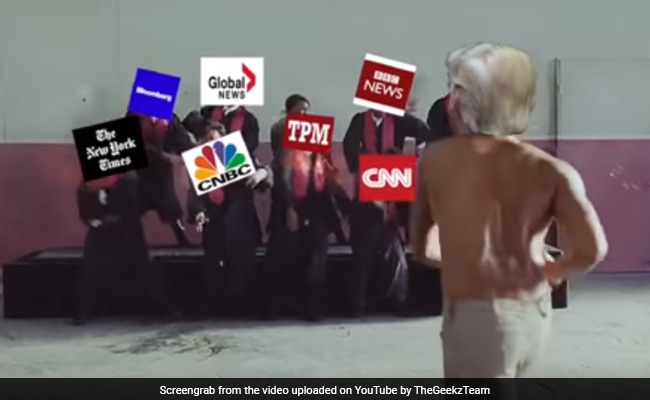 Pro-Trump meme creators defended the video as a political parody.

A violent parody aired this weekend at President Donald Trump's Miami-area golf resort - and the video's mass sharing afterward - is yet another example of how Trump and the once-fringe movements of online trolls and meme-makers who support him have reshaped mainstream politics and the media.

The meme video, a spoof derived from a bloody action film, drew outrage from some for its depiction of Trump shooting journalists and attacking political figures who've been critical of him, both Democrats and Republicans. Some warned that the clip and others like it could incite real-world violence.

But that outrage also helped ensure that the video, which had been available on YouTube for more than a year, would be circulated more widely. Trump's online provocateurs on Monday portrayed the parody video's viral distribution as a victory - and a reason to create more like it.

TheGeekzTeam YouTube channel, where the video is displayed, was viewed more than 129,000 times Monday, up from an average of about 600 views a day, according to data from the tracking site Social Blade.

Some pro-Trump supporters wrote online that they were giddy that the violent video had been shared en masse, including by journalists, whose revulsion they have claimed as a badge of honor. Others said they were emboldened by the impact the video had made and would continue pushing the boundaries in future memes. One pro-Trump user early Monday tweeted that the furious reaction to the video "is why the meme was made."

"These new memes are the 21st century version of political cartoons. Get f---ed you p---ies," the user "AllesErdreich" wrote Monday on the pro-Trump Reddit forum "The_Donald." The user said the media was seeking to "cry and manipulate . . . zombies into clutching their pearls at the thought of (nonexistent) fascistic violence towards the free press. They do this because they realize they are losing control to independent content creators on the internet."

Becca Lewis, who researches online subcultures and media manipulation for Stanford University and the think tank Data & Society, said the video's sharing showed how such memes have become a potent force for political expression and propaganda. The meme creators, she said, routinely sought mainstream attention for the memes in a way that would make the shocking content seem more and more acceptable.

"The attention economy makes it so that whoever is interested in promoting the most shocking stuff ends up getting a tailor-made news cycle for themselves," Lewis said. "The mainstream media gets shocked and disgusted and therefore posts the video, but that in turn gives more viewership to the video. And there's nothing the meme creators want more than to shock and disgust the mainstream media."

The incendiary video was aired at a conference held by the pro-Trump group American Priority at Trump's golf resort in Doral, Florida, a Miami suburb, and was first reported by the New York Times. American Priority distanced itself from the video in a statement appended to its website publicizing what it called a three-day festival.

"This video was not approved, seen or sanctioned by the #AMPFest19 organizers," the statement said, adding that organizers were not aware of the video until they were contacted by the Times. The statement claimed that authorized sessions included one denouncing political violence.

In the video, a man dressed in a suit, with Trump's head superimposed on the body, embarks on a bloody rampage in a church, targeting occupants labeled with the logos of media organizations, including The Washington Post; lawmakers including Rep. Maxine Waters, D-Calif., and Sen. Bernie Sanders, I-Vt.; Republicans Mitt Romney of Utah and the late John McCain, and others including an image labeled "Black Lives Matter." The assault was taken from a scene of a graphic brawl in the 2014 action movie "Kingsman: The Secret Service."

The news drew widespread criticism, including from Democratic presidential candidate Beto O'Rourke, who warned in a tweet it "will get people killed."

Democratic lawmakers also sharply rebuked the White House. Rep. Frank Pallone of New Jersey, who leads the House's top tech-focused committee, described the video as "abhorrent," criticizing Trump for having "promoted extremist voices" in a bid to boost his presidency. Sen. Mark Warner, D-Va., meanwhile, fretted that the incident was "disturbing, but frankly not surprising."

"From the beginning, Mr. Trump has cultivated support from some of the worst corners of the internet. He's used his office to elevate this toxic internet culture while ignoring the real challenges we face on social media," Warner said in a statement.

Reacting early Monday, Stephanie Grisham, the president's press secretary, said Trump "has not yet seen the video," and would watch later, "but based upon everything he has heard, he strongly condemns this video."

At least one of the pro-Trump firebrands tied to the videos attended a "social media summit" hosted by the White House in July, where Trump previously had lauded their efforts and attacked social media companies for allegedly censoring conservatives. The event sparked fresh fears that the White House was endorsing their controversial online tactics ahead of the 2020 election.

The church-shooting video has been viewable since July 2018 on the YouTube account of TheGeekzTeam, whose subscriber count rose 1,000 on Monday, to 19,000. The account, which and says it is "dedicated to pissing off liberals," includes more than two dozen videos celebrating Trump and tearing down his opponents. Its most recent, in August, is a spoof of the action movie "John Wick: Chapter 3 - Parabellum," and shows Trump shooting up presidential candidates Sanders, Sen. Cory Booker, D-N.J., and businessman Andrew Yang.

TheGeekzTeam is one of several contributors to MemeWorld, a pro-Trump meme site created by a far-right Internet personality who calls himself Carpe Donktum but whose real name is Logan Cook. The self-described "memesmith" attended the White House social media summit in July and met personally with Trump, who called him a "genius."

"Trump is absolutely engaging the darkest sides of some of the most extreme people in this country right now," said Dipayan Ghosh, co-director of the Digital Platforms & Democracy Project and Shorenstein Fellow at the Harvard Kennedy School, and a former policy adviser to the Obama administration.

"He himself posted a video with similar themes two years ago. Meanwhile he's not challenged the extreme views of many of the far right," Ghosh added. "The fact that he cannot come out and make a strident statement against violence and this kind of behavior is absolutely shocking and not appropriate for the president of the country."

Pro-Trump meme creators defended the video as a political parody, and said the online fury over its screening at the Trump resort was overwrought because it had been played in the corner of a room away from the main conference events. In its statement, American Priority called the video "unauthorized" and noted it had been shown in a side room, and not from the event's main stage.

Several Trump backers laughed off the argument that the meme and videos like it could incite violence. Carpe Donktum, the Kansas man who has previously requested his full name not be used because he fears online or in-person harassment, tweeted a number of memes early Monday morning satirizing the argument, including one from "Star Wars" in which a Death Star labeled "Memes" blows up a planet labeled "Mainstream Media." "This is an incitement of violence. Please do not share," he wrote. It's been viewed more than 37,000 times.

In a statement, Carpe Donktum said the video was "CLEARLY satirical" and that "no reasonable person would believe that this video was a call to action, or an endorsement of violence towards the media."

"This attack is yet another example of the Mainstream Media's hypocrisy," he wrote. "The MSM could not find any controversy within the conference itself, so they have manufactured this outrage campaign to discredit its success."

YouTube, which is owned by Google, added a restriction to the pro-Trump meme video Monday that forced viewers to confirm that they were an adult before viewing. "For content containing violence that is clearly fictional, we age-restrict and display a warning interstitial. We applied these protections to this video," said Ivy Choi, a spokeswoman for YouTube.

On Monday afternoon, Carpe Donktum's Twitter account was briefly suspended for, he said, violating the social media site's copyright rules with another video. But he was quickly reinstated.

For these sites and others, the incendiary posts, tweets, photos and videos by Trump's online allies have proven to be a vexing political and policy challenge. On one hand, the content could violate each of the sites' policies, raising fresh questions as to whether Google and Twitter have taken sufficient steps to ensure their services don't become conduits for real-world violence. At the same time, these tech giants often face criticism for going too far, particularly from Trump and his peers who claim that Silicon Valley is biased against conservatives.

The president even convened a full "social media summit" in July to take aim at sites including Facebook, Google and Twitter, while rallying some of his most fervent online supporters ahead of the 2020 election. Among the roughly 200 conservatives in the room were some of the Web's most controversial provocateurs who have shared doctored videos and spread conspiracy theories about Trump's opponents.

"Some of you are extraordinary. The crap you think of is unbelievable," Trump said.

Pro-Trump meme creators have routinely built dark parodies and shareable memes from Hollywood films, superimposing the faces of journalists they dislike and the logos of media organizations onto characters getting beaten up or humiliated by a mighty Trump character.

Carpe Donktum's memes, which have often been widely boosted by Trump supporters on sites such as Reddit and Twitter, include one in which he animated former vice president Joe Biden's apology video to show the candidate caressing his own shoulders.

"Where is the genius? I want to meet the genius," Trump said to Carpe Donktum as the men entered the Oval Office, according to the recollection of another pro-Trump meme creator called @mad_liberals, who also requested anonymity due to fear of harassment.

Memes from Donktum, a stay-at-home dad who raises money through online donations, have been tweeted or retweeted by Trump at least four times this year. One, a fake animated cover of Time magazine showing Trump remaining in the White House forever, has been viewed more than 29 million times.

(Except for the headline, this story has not been edited by NDTV staff and is published from a syndicated feed.)
Comments
Donald TrumpDonald Trump's parody