Nancy Pelosi said she talked with Joint Chiefs Chairman "to discuss available precautions for preventing an unstable president from initiating military hostilities or accessing the launch codes and ordering a nuclear strike." 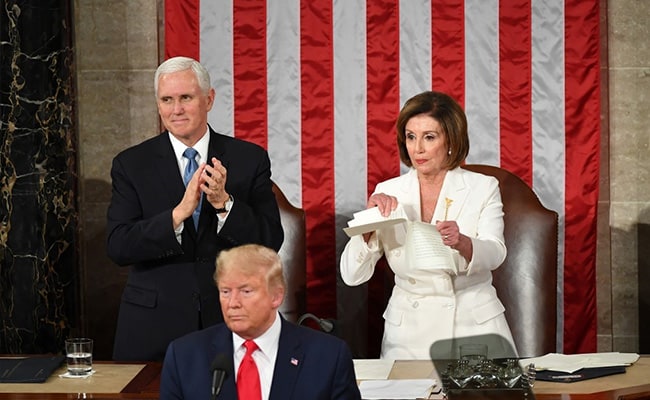 US House Speaker Nancy Pelosi said Friday she spoke with the nation's top military leader about ensuring that an "unhinged" President Donald Trump does not launch a nuclear attack in his final days in office.

The top Democrat in Congress said she talked with Joint Chiefs Chairman Mark Milley "to discuss available precautions for preventing an unstable president from initiating military hostilities or accessing the launch codes and ordering a nuclear strike."

The extraordinary acknowledgement that Pelosi has spoken with military brass about restricting the president's powers enshrined in the US Constitution came in a letter to her Democratic colleagues, and highlight the tensions in Washington over Trump's remaining days in the White House.

"The situation of this unhinged president could not be more dangerous, and we must do everything that we can to protect the American people from his unbalanced assault on our country and our democracy," she wrote.

A Milley spokesman, Colonel Dave Butler, said Pelosi did call the joint chiefs chairman but would not provide specifics other than to say Milly "answered her questions regarding the process of nuclear command authority."

Pelosi in her letter also said she is prepared to launch impeachment proceedings against Trump if he does not voluntarily resign or if Vice President Mike Pence does not begin a process laid out in the 25th Amendment that allows him and the cabinet to remove the president.

"If the president does not leave office imminently and willingly, the Congress will proceed with our action," she said.

Articles of impeachment have been drafted but they have yet to be introduced.

Momentum is growing among Democrats on Capitol Hill for ousting Trump after his supporters stormed the US Capitol seeking to prevent lawmakers from certifying Democrat Joe Biden's November election win.

Democratic and Republican lawmakers alike described the mayhem, in which five people died including a US Capitol Police officer, as an insurrection, and critics are accusing Trump of fomenting the violent unrest.

"There is growing momentum around the invocation of the 25th Amendment, which would allow the vice president and a majority of the cabinet to remove the president for his incitement of insurrection and the danger he still poses," Pelosi wrote.

She and Senate Minority Leader Chuck Schumer on Thursday placed a call to Pence to discuss invoking the 25th Amendment but he did not respond.

"We still hope to hear from him as soon as possible with a positive answer," she said.