The judge's decision to reject prosecutors' requests to jail them gives the separatists, whose leader Carles Puigdemont went into self-imposed exile in Belgium last week, some breathing space as lower courts have been steadily tightening the legal noose. 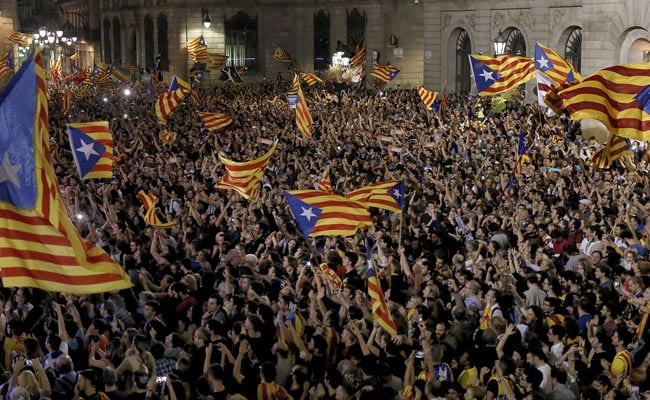 A Spanish judge on Thursday freed on bail the Catalan parliament's speaker and four lawmakers while authorities continue to investigate their roles in Catalonia's banned independence drive.

The Supreme Court had summoned them to answer charges of rebellion after they enabled an Oct. 27 declaration of independence that prompted the Spanish government to dissolve the Catalan parliament and sack the regional administration.

Speaker Carme Forcadell will be transferred to the Alcala Meco prison outside Madrid and kept there until she pays 150,000-euro bail, court sources said. The four lawmakers must pay bail of 25,000 euros while a fifth was released without bail.

Judge Pablo Llarena wrote in Thursday's ruling: "All the accused ... have expressed that either they renounce future political activity or, those that remain active, will in future renounce any actions outside the constitutional framework."

The judge's decision to reject prosecutors' requests to jail them gives the separatists, whose leader Carles Puigdemont went into self-imposed exile in Belgium last week, some breathing space as lower courts have been steadily tightening the legal noose.

Eight former members of the Catalan government and the leaders of the two main pro-independence grassroots groups remain in custody awaiting trial at the High Court on charges of rebellion and sedition.

On Thursday, the High Court rejected an appeal presented by their lawyers for their release, a court spokeswoman said.

The High Court last week issued an arrest warrant on rebellion charges for Puigdemont, the former regional government president, and four former members of his cabinet who are with him in Brussels.

After the ruling, Puigdemont tweeted: "Carme Forcadell will spend the night in prison for allowing a democratic debate. For allowing speaking and voting! That's Spanish democracy for you."

The Catalan independence push has deeply divided Spain, dragging it into its worst political crisis since the return of democracy four decades ago and fuelling anti-Spanish sentiment in Catalonia and nationalist tendencies elsewhere.

The struggle has also divided Catalonia itself, and cracks have begun appearing within the pro-independence movement.

On Tuesday, Puigdemont's PDeCAT party failed to agree on a united ticket to contest a regional election with another secessionist party, making it difficult for the pro-independence camp to govern Catalonia after the vote and press ahead with its bid to split from Spain.

Spanish Prime Minister Mariano Rajoy called the election following the independence declaration, which the Constitutional Court ruled was against the constitution.

Forcadell earlier told the Supreme Court that the declaration was not legally binding, according to court sources, in a comment that could undermine the secessionist push. At the time she described Rajoy's actions as a "coup" and an "attack against democracy".

The Supreme Court on Thursday took a softer tone than the High Court did in its own ruling that jailed the former government members.

"Citizens supporting an idea of independence is legitimate," Judge Llarena wrote. But, he added: "It can be excluded that the accused aspired to gain independence through legal means."

The Supreme Court decided on Thursday to take over two other cases against Forcadell and the lawmakers currently overseen by a Catalan court, suggesting its judges were looking to centralise all legal proceedings involving the independence vote under one roof.

The Supreme Court, which handles cases against defendants with parliamentary immunity, has legal powers to also take over the Spanish High Court case involving the government members but so far has made no statement on its intentions.