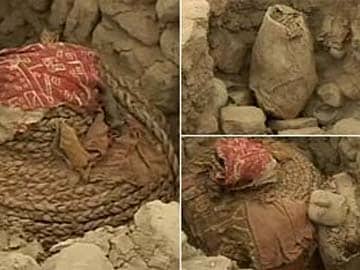 Cairo: Spanish experts have discovered an intact funeral chamber containing nine mummies in the tomb of governor Haqaib III, which dates back to the Middle Kingdom (2050-1750 BC), in the southern Egyptian city of Aswan.

"The team has found the tomb of a Middle Kingdom governor for the first time in 100 years," said project director Alejandro Jimenez.

The group of experts from the University of Jaen in Spain and Egypt's Supreme Council of Antiquities completed this year the excavation of the governor's tomb, which had been discovered previously, and brought together "all the pieces" to confirm that this was the tomb of Haqaib III.

Pictures of the governor had also been found on Elephantine Island in the Nile River near the city of Aswan.

Later studies, however, revealed that his appearance had been altered in those representations, since this high official suffered from scoliosis, or lateral curvature of the spine, and had an early death at age 30 in living conditions the archaeologist described as "very tough".

The deceased governor was of Nubian origin, judging by some personal possessions that were found, including a dagger made with the technique used by that ethnic group in southern Egypt.

In that same tomb, located in the Qubbat al-Hawa area, the experts found a chamber with sarcophagi containing nine mummies of the Late Period of Ancient Egypt (724-343 BC).

"These were the mummified bodies of eight humans and a crocodile," Jimenez said.
Comments
SpainEgyptMummyGovernorAswanMiddle Kingdom