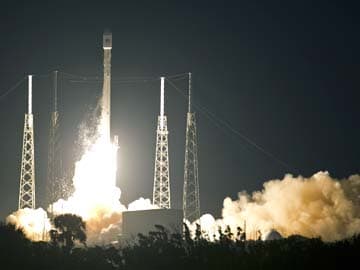 Cape Canaveral, Florida: An unmanned Falcon 9 rocket developed by Space Exploration Technologies, or SpaceX, blasted off on Tuesday to put the company's first commercial satellite into orbit, staking a potentially game-changing claim in a global industry worth nearly $190 billion a year.

The 22-story rocket lifted off from its seaside launch pad at Cape Canaveral Air Force Station in Florida at 5:41 p.m. EST/2241 GMT.

Perched on top of the rocket was a 7,000-pound (3,175 kg) communications satellite owned by Luxembourg-based SES S.A., which operates a 54-satellite fleet, the world's second-largest.

"I'd like to thank SES for taking a chance on SpaceX," company founder and chief executive Elon Musk posted on Twitter an hour before launch. "We've given it our all."

The satellite, known as SES-8 and worth more than $100 million, will be positioned to provide television, broadband and other communications services to customers in India, China, Vietnam and elsewhere in Asia.

"It's an extremely important satellite for us," Martin Halliwell, chief technology officer of SES, told reporters before the launch.

"We know that as we go forward into these very significant growth markets that it's absolutely critical that we have a cost-effective and efficient way to get to orbit. That's really what SpaceX has brought us," Halliwell said.

SpaceX's launch schedule includes nearly 50 missions, worth about $4 billion. About 75 percent of the flights are for commercial customers.

The global satellite industry had revenues of nearly $190 billion in 2012, including nearly $90 billion in television services alone, the Satellite Industry Association trade group reported in October. The US share of the market is 45 percent, the report said.

Previous SES satellites were launched primarily aboard Russian Proton and European Ariane rockets, which cost far more than the approximately $55 million the company paid for its ride on SpaceX's Falcon booster, Halliwell said.

He would not say exactly how much SpaceX undercut the competition, but did say SES received a discount by agreeing to fly on Falcon 9's first mission to high orbits orbit used by communications satellites.

In addition to a September 29 test flight of an upgraded Falcon 9, older versions of the rocket flew five times successfully, including three missions for NASA to deliver cargo to the International Space Station, which orbits about 250 miles (about 400 km) above Earth.

That altitude requires less fuel for SES-8 to fly itself into its 22,369-mile (36,000-km) high operational orbit, thereby extending its service life.

Promoted
Listen to the latest songs, only on JioSaavn.com
SpaceX needs three successful launches of its upgraded Falcon rocket before it will be eligible to compete to carry the US military's largest and most expensive satellites, a market now monopolized by United Launch Alliance, a partnership of Boeing and Lockheed Martin.