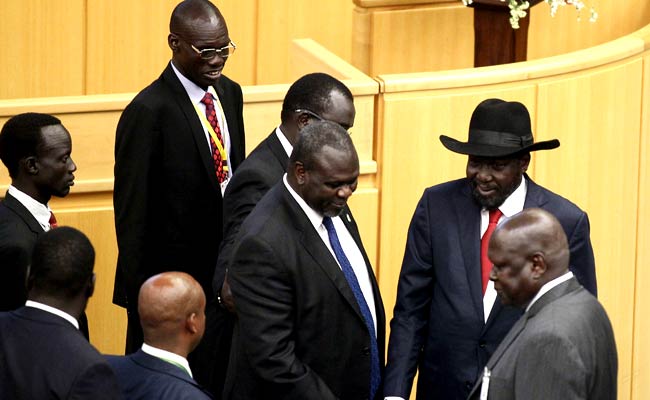 The rivals were supposed to form a government by January 22, but rebels say Kiir's nearly tripling of the number of regional states in December undermines a fundamental pillar of an August power-sharing deal to end two years of civil war.

Rebel spokesman Mabior Garang criticised "anti-peace hardliners within the government" and said they would base negotiations on the old system of 10 states and not the current 28.

Garang however said rebels are "fully committed to peace and shall not entertain a return to war."

Key international backers -- the so-called Troika, made up of key donors Britain, Norway and United States, as well as the European Union -- this week said the talks were "deadlocked".

Amid mounting frustration, they cut payment of hotel bills for rebel delegates in Juba.

Civil war began in December 2013 when Kiir accused his former deputy Riek Machar of planning a coup, setting off a cycle of retaliatory killings that have split the poverty-stricken country along ethnic lines.

Despite the August agreement fighting continues, with the conflict now involving multiple militia forces who pay little heed to paper peace deals and are driven by local agendas or revenge attacks.

Heavy fighting was reported this week in the southwestern Western Equatoria region, including street battles in the state capital of Yambio on Thursday, close to border with Democratic Republic of Congo, aid workers said.

The clashes were between soldiers and a local militia known as the Arrow Boys, reportedly aligned with Machar's rebels.

United Nations rights monitors this week added more details to a long list of horrific abuses in the more than two-year war.

The report detailed "gross violations" of human rights including "gang-rape, sexual slavery and forced abortion", in a joint report by the UN peacekeeping mission, UNMISS, and the UN High Commissioner for Human Rights (OHCHR).