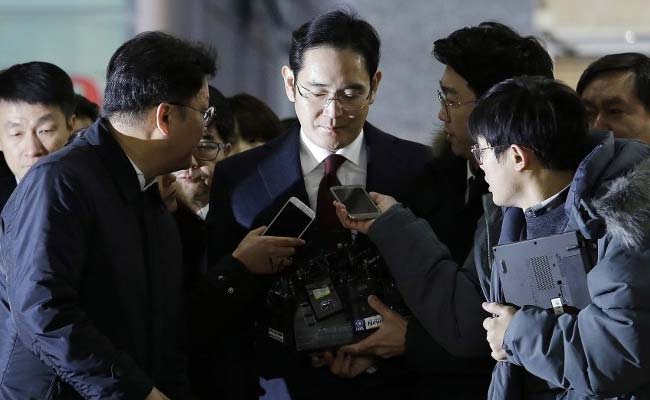 Lee Jae Yong has been accused of bribery, embezzlement and perjury (AFP Photo)

The dramatic corruption and influence-peddling scandal that has gripped South Korea took another sensational turn Monday when special prosecutors sought to arrest the de facto head of Samsung - and hinted that they might have President Park Geun-hye in their sights next.

The independent counsel investigating the case accused Lee Jae-yong - who is officially the vice chairman of Samsung Electronics but runs the corporate behemoth controlled by his family - of bribery, embezzlement and perjury Monday. Prosecutors asked a local court to issue a warrant for his arrest. A court will review the request Wednesday.

The prosecutors suspect that Lee ordered his executives to use corporate money to pay bribes to the president's secret confidante in return for favorable treatment and that he lied about it when he appeared before a parliamentary panel last month.

"The national economy is important, but upholding justice is more important," Lee Kyu-chul, spokesman for the independent counsel, said when announcing that it would seek to detain the Samsung leader while they continue their investigation and decide which formal charges to press. Prosecutors had previously said they would take into account the economic effect of arresting the head of the country's largest conglomerate, which accounts for about a fifth of South Korea's exports.

Three other senior Samsung officials, including the chief executive of the flagship Samsung Electronics, were formally placed under investigation, but warrants have not been sought for their arrest. The turmoil comes as Samsung tries to recover from its humiliating and costly recall of the Galaxy Note 7 smartphone, several of which caught fire.

Samsung said Monday that it found it hard to accept the prosecutors' conclusions because the group "did not make contributions in order to receive favors."

The request to arrest the head of Samsung marks another startling development in a scandal that has transfixed the country and brought it to a political halt. Park, the country's first female president, was suspended from duty in December after the National Assembly voted to impeach her. The Constitutional Court is deciding whether to uphold the motion.

The scandal revolves around Park's relationship with Choi Soon-sil, a lifelong friend who held no official position and had no security clearance yet was secretly advising the president on everything from North Korea policy to her wardrobe.

Choi is on trial on charges that include bribery, coercion and abuse of power. Prosecutors allege that Choi took money from big businesses including Samsung, ostensibly for two foundations that she ran, but that the money was in fact payment for Choi's help in business deals. She is accused of taking almost $70 million in this way, with the largest portion - almost $20 million - coming from Samsung.

Samsung is also suspected of having agreed to an $18 million contract with a Germany-based consulting firm owned by Choi, considered a front for funding her daughter's equestrian training there.

In a hearing in the National Assembly last month, Lee denied any involvement in a bribery scheme, although he said Samsung had bought a $900,000 horse for Choi's daughter.

The special prosecutors said Monday that they had "objective, physical evidence" showing that Choi had been sharing her profits with the president, meaning that paying bribes to Choi was essentially the same as paying bribes to Park. This triggered speculation in Seoul that the investigators would seek to question Park, who has remained in the presidential Blue House while the court deliberates.

Lee was called into the prosecutor's office last week for a marathon 22 hours of questioning about the scandal, after which the independent counsel made its request Monday.

Prosecutors accused Lee and Samsung of paying about $36 million in bribes through Choi to help secure favorable business treatment for an $8 billion merger of two key affiliates, part of the Lee family's attempts to consolidate control over the conglomerate. They needed the support of the National Pension Service, the world's third-largest pension fund and a major Samsung shareholder, and prosecutors allege that Choi put pressure on the fund to support the deal - which it did.

The 48-year-old is the third-generation Lee to run the conglomerate, which was founded by his grandfather as a small trading company before World War II but, with the support of Park's father, former president Park Chung-hee, became a giant that sells everything from cellphones and ships to life insurance and hospital services.

Lee has been running the group since his father, Lee Kun-hee, was incapacitated after a heart attack almost three years ago. But because his father remains unconscious in the hospital, the youngest Lee has not assumed the chairman's role.

Samsung objected to the allegation that the merger was not aboveboard. "In particular, we find it hard to accept the special prosecutor's argument that Samsung has made improper requests related to the merger of Samsung affiliates or the leadership transition," company spokeswoman Rhee So-eui said. "We believe the court will make the appropriate judgment on this matter."

Promoted
Listen to the latest songs, only on JioSaavn.com
On Monday, the independent counsel also indicted Moon Hyung-pyo, a former health minister who served as head of the National Pension Service, accusing him of abusing his power while he was minister to pressure the fund to support the deal.